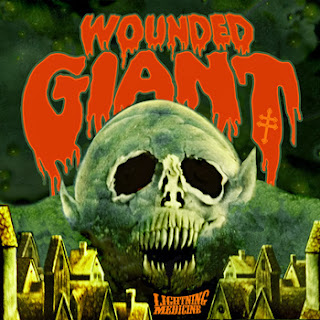 Wounded Giant is the ugly girl at the dance.  The one you get stuck talking to because everybody else is out dancing or otherwise occupied.  And anyway you get to talking and you notice that beneath that unappealing exterior is a double D sized personality.  It's what she's needed to do in order to survive this shallow universe of ours.  There's nothing flashy about her and yet days after the dance you find yourself thinking about her.  And suddenly, she's not so ugly anymore.  In fact, she's downright beautiful because you've seen past all that surface crap you're usually so hung up on and saw the inner person, which is what really counts.  Are we still talking about music here?  Here we go ...

Nothing flashy here.  This is just some tight midtempo metal with great vocals that's heavy on the psychedelics.  Drummer Alex Bytner isn't afraid to go double kick or power groove or slow and lumbering and though I don't know the guy, I love him for it.  It's well worth noting at this point that Bytner also drums with Seattle horror metal extremists BlackQueen which a completely different style of music altogether, let's just say Wounded Giant is a bit slower paced than the BQ's.  That's why I know, with such a proven track record that whatever the song needs here, he's got it somewhere in that bulging bag of tricks of his.  And he doesn't need to thrust his amazing skills in your face at every turn, he knows they're there.  He's the guy that doesn't need to buy the huge truck with the giant tires to prove he's "a real man", he's got it where it counts.  It's called confidence people, and it's about what's on the inside of the man, not the outside.  Are we still talking about music here?  Yes, yes we are this time.

Vocalist / riffworshipper Bobby James is a confident man, too.  Is it too or is it also?  Uh ... er ... anyway, right, confidence!  He's got it, man.  Mr. James doesn't need to skull rape your earholes with soaring falsetto screams every chance he gets to prove to you how worthy he is of your praise and devotion.  He was naturally blessed with a great vocal asset, but he doesn't need to hang it out there like a whore or hide it beneath the baggy clothing of vocal effects like echo.  He just does his thing.  Are we still talking about music here?  Maybe.

'Lightning Medicine' brings it all together in a way that I insist ins't flashy, maybe it's because so much of the burden to carry this thing is placed upon Mr. Rogers's shoulders.  All dicking around aside, with James off in "noodle land" half the time, Rogers picks up the ball and carries it to the end zone.  He puts the three man team on his back, he even puts himself on his own back, that's the kind of skill set he's working with here.  It's mystifying.  It's like the Green Hornet and Kato.  Sure the Green Hornet is the star of the show, it's his name on the marquee, but it's sidekick Bruce Lee (hey, there's a Seattle connection and I wasn't even shooting for one!  Well, whaddya know?) that kicks the largest amount of ass and in the most stylistic way possible.  Of course, that's not to piss all over Mr. James's contributions, they are a team after all.  The two work in tandem like hand in glove and I'm sure it's the trust he has in Rogers that allows him to take off on flights of axe swinging fancy, which he does, early and often.  Okay, we're definitely talking about music this time.

The album has a nice round feel to it as it's bookended by some fancy wah bass, pulsating robotically to prove once and for all that Dylan A. Rogers provides the band's heartbeat.  In between are some great songs, not overly hooky, but memorable enough.  What you will most likely come away with after listening to 'Lightning Medicine' is the overall feel of it, good vocals and a strong presence of doom that will leave a metallic aftertaste in your mouth.

Highlights include: "Rats in the Walls" and "Sinistra"

Wounded Giant on facebook
Posted by LK Ultra at 19:39