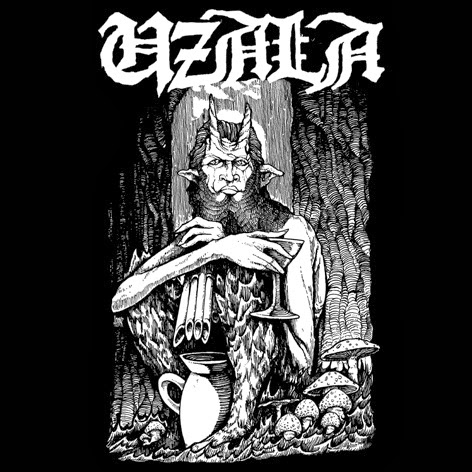 ARGUS - BEYOND THE MARTYRS
Coming in at #21 on this week's list, Argus's third and latest full-length album 'Beyond the Martyrs', released October 4 on Cruz Del Sur Music, has made a ferocious comeback in my daily listening habits.  Formed in 2005 by guitarists Jason Mucio & Mike Wisniewski, bassist Jason Viele and drummer Kevin Latchaw the band changed bass guitarists, adding Andy Ramage to pull up the low-end and inserting the immaculate Butch Balich on vocals before releasing their first demo in 2007.  The band then replaced Wisniewski with Erik Johnson on second guitar.  I hopped on the Argus train at a much later stop, about a year and a half after the release of the incredible and excellently titled 'Boldly Stride the Doomed'.  Actually, I can thank Soggy Bob and his Soggy Bog of Doom podcast for that, when I heard the band on his traditional doom special (still a seminal episode in my personal doomed stridings).  Anyway, I was completely blown away by the record, by the power the band wields and by the confident strength inherent in Balich's anthemic vocals, which comes across particularly well on my favorite song from the album, "The Ladder".

So it all goes without saying that expectations of 'Beyond the Martyrs' were high, incredibly high, perhaps even impossibly high here in the Paranoid Bunker and alas 'Beyond the Martyrs' did not meet them upon my first few listens.  But I couldn't give up on this band or this album, I kept the album on the back burner on low heat for the better part of two and a half months, lifting the lid on it every now and then, checking to make sure I wasn't too impatient with it.  But of course, I was.

You see, paranoia can come in handy and it was that low paranoid throb at the base of my skull which told me that I was missing out on something great here.

Sometimes, you can't be paranoid enough.

In the end 'Beyond the Martyrs' is a worthy follow-up to 'Boldly Stride the Doomed'.  Opening track "By Endurance We Conquer" is perhaps the best song I've heard from the band yet with Balich's confident strength once again shining through with excellent storytelling that can't fail to pump you up, it's currently riding high in the doom chart's top 25 songs list and will remain a highlight of metal for as long as man endures.  "Trinity" is another standout track touching on Vedic themes in suitably epic fashion.  Drummer Kevin Latchaw deserves to be singled out as well for another excellent performance, perforating the band's guitar heavy attack with double kick when needed and for providing large dollops of drive throughout while guitarist Mucio's solos continue to be a source of inspiration.

This album is recommended for all fans of traditional and/or epic doom and you can find it by clicking through the link at the listing above (the same can be said for all the albums on this list, naturally) and you can also find it on itunes.
Posted by LK Ultra at 19:43