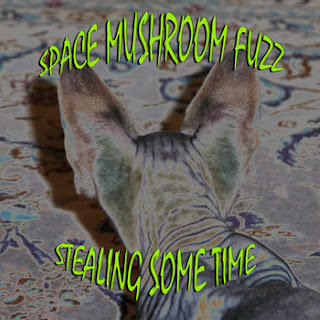 Space Mushroom Fuzz releases albums at a nearly comical rate.  They're the kind of duo (Adam Abrams [guitar, bass, synth & vocals] & John Belcastro [drums]) who releases an album one day and posts on facebook how the "new" one is almost finished a week later, they're always one step ahead, or more accurately, one album ahead of the game.  It's the reason that when I posted my review of the band's last and then current record 'A Possible Paradox' [link], I could have given you the name of their next album, 'Stealing Some Time' which is the album at hand and how I can even now give you the name of their next album, 'Burning the Almanac' which the band has almost finished tracking for already (if not done by now).  'Stealing Some Time' is Space Mushroom Fuzz's fifth album, each of them contains six songs (there's also a single and an EP and something else that we'll touch on in a minute).

Because the band releases albums at such a whirlwind pace (in chronological order starting in 2012: June, October, April, August, November) the band shows little development from release to release, but it's there.  It seems subtle, but when you listen to 'Stealing Some Time', then go back to the group's first release 'When Time Trippers Collide', it's fairly obvious how far the band has come.  For one thing, the performances are more energetic, more exuberant and it makes a big difference.  Abrams retains his distinctive harmonized monotone vocal delivery, yet it's more lively than ever before.  Matter of fact, he tries a few different shifts on the first pair of tracks ("Invisible to See" & "Time Gets Carried Away") which add a whole other layer to the band's usual brand of '70's sounding space rock.  I doubt there's a band out there who does this style better.  I remember listening to their song "Under Control" on a mixed playlist and wondering what '70's band it was, because I didn't recognize it, no one else has ever fooled me like that.  But if Abrams is going to shift his vocals into a higher range on this album, then it's only fitting that the band shifts up an octave in time as well to the very 1980's neo-psych, paisley underground sounding "The Sun is Electric".  It's at this point that 'Stealing Some Time' is beginning to feel like Space Mushroom Fuzz's best offering since album # 2, 'Something Weird's Going On'.

The band has also largely purged it's initial experimental nature as they now sound like a band which knows what it wants to achieve, then goes about its business.  I mentioned earlier that all SMF albums contain six tracks, well there's a 20 minute difference in running time between album number one and album number five and though they no longer sound like Hawkwind circa 'Space Ritual', they have forged their own identity and what excitement is lost in the free flowing space jams of an early song like "Watching the Watcher" is made up for by the growing sophistication of the band's musical ideas.  Still, there's at least one jammy instrumental freak out on each of the group's releases and this one is no exception with "Time Tunnel / Time Space" closing out the affair.

Since their first appearance on the summer solstice of 2012, Space Mushroom Fuzz has eight releases under its collective belt, with Adam Abrams also releasing music with Blue Aside and Palace in Thunderland during that span, that makes 10 releases in under a year and a half ... and it still doesn't come close to touching the output of cross-town neighbor Ron Rochondo (Ice Dragon, Tentacle, The Mangled Dead, Velvet Robe, and  a couple others).  Still, it's impressive for the level of dedication shown to this project if for nothing else.  And just to get a sense of the pace at which SMF releases material, they've already got a two track live in studio album up in bandcamp ('Live at Reverse Feed Studio - 11​/​16​/​13' - link) with a full line-up (adding Scott Levine of Semi Good Looking on bass) and it trumps 'Stealing Some Time' in terms of length.

As with everything they do (with the one exception of 'Marty's Original Escape'), 'Stealing Some Time' is available on bandcamp in CDR format for $3 or if that doesn't tickle your fancy it's also available as a FREE (or pay-what-you-want) digital download.  Grab it in your preferred format at the links on the player below.

Highlights include: "Invisible To See" and "Time Gets Carried Away"

Space Mushroom Fuzz on facebook
Posted by LK Ultra at 18:25