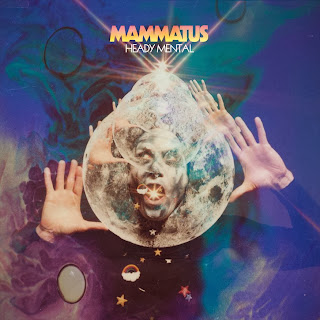 I walk slowly from the room, stiff-legged and saucer-eyed.  I don't know what the hell that was, but somehow I like it and am darkly fascinated by it.  I've been to other dimensions, and they're about as convincing a reality as Tron and yet I can get lost in there.  This is my reaction to Mammatus, the "spacier-than-thou" power trio from Santa Cruz, California.  I'm confused and a little scared, but I'm also slightly aroused.  This is far out.

The three song, 32-minute 'Heady Mental' is a raw and naked showcase of the band's space rock extremity, where sounds explode in a kaleidoscope of colors and structures breathe, tones pulsate and album covers taste like vinegar. Sensory overload is the name of the game here and that's no average feat considering this medium is supposed to be limited to the aural.  Mammatus scoffs at such a notion.  It just so happens that when they scoff, their faces and the spaces around them explode into paisley flowers of tasty colors.  Don't look now but a locomotive is about to chug through the interdimensional membrane that is your living room wall.  Welcome to another interpretation of reality.

The album title itself provides a clue to the mysterious world you will find within, 'Heady Mental' is a brisk exercise for mind and body.  This is brain food.  The stunning sounds of Mammatus swell from the majestic to the galactic, the majestic coming in the form of polyrhythmic syncopation which coalesces in earth-shattering grooves while the Hawkwindian synth space swells provide the soundtrack to the galactic.

On stage, Mammatus at one time combined costumed theatrics with their musically acrobatic space / prog rock attack and although that sensibility is now downplayed (the band now sports a look they call Post Wizard New Mage Far Out Casual), somehow that old sensibility is broadcast on record.  With similarly themed song titles being connected by tones and moods it gives the album the feel of a lost Peter Gabriel-era Genesis record, by way of the Canterbury scene or Hawkwind interpreted by the soundtrack composers for the original NES gaming system, which comes to a head on "Brainbow".

The theme of the four song titles is the brain, the physical medium between body and mind, thought and action.  Listen closely and you may blow a gasket trying to figure out the time signatures involved or you may drift off into some mental movie which takes you from the helms of space ships to the palaces of a witch planet to a cave of luminescence.  'Heady Mental' is some serious imagination fodder.  But listen again at a distance and you may find your head nodding and your toes tapping in implicit agreement with Mammatus's controlled zaniness.  In other words, this isn't complex music for intellectual snobs, but there is complexity which is at its best when serving to wrap itself around a labyrinthine groove.

'Heady Mental' is a groove for both mind and body, eliciting adventures on a stiff shot of prog, once more an intellectual and visceral workout.  So by the end of it all, if you feel your brain is bust, don't sweat it, don't freak out, because it's all part of the trip.  This trip is available on LP through Spiritual Pajamas and as mp3 or FLAC downloads $6 and $7 respectively at the link provided below.  Warning: this is a breakthrough dose.

Highlights include: "Brain Drain" and "Brainbow"

You can also find 'Heady Mental' on itunes.
Posted by LK Ultra at 19:09