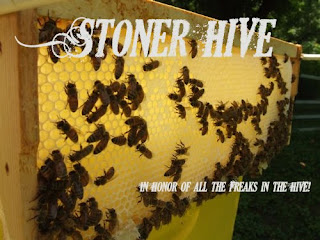 I've been thinking for a long time how to get you guys involved in the doom charts in some way to make them into something really special.  That's one of the reasons I started doing the Super Doom Chart every month, as a kind of beta test.  I'm still working on it, but I'd be more than happy to take your suggestions on the matter in the comment section below or on the Paranoid Hitsophrenic facebook page.  But my buddy Joop Konraad of the Stoner Hive blog has already found a way to get everybody involved and engaged with an annual end of the year top 20 list of his own.  Draft up a ranked list (top 1-5, after that it doesn't matter) of your favorite albums released in 2013 from any genre of music and send it via email to stonerhive@gmail.com.That's all you have to do.    As Joop says, the list can be 1, 5, 10, 20, 41 or 968 albums long. The lines will stay open until December 11, on the 12th of December Joop will roll out #20, that's the 20th most voted for album by you and me.  The 19th spot will roll out on the 13th and so on until the list reaches its stunning conclusion.  Last year, it was a lot of fun and he does a great job of rolling the albums out.  I must admit it's pretty exciting checking in to the Stoner Hive every day to see what album comes in next.  So get cracking on those lists!  There's less than a week of voting left to go, but surely enough time to send one in.  I encourage you all to do this so we can get the most accurate look at what albums people loved from 2013 as we possibly can!  I'll leave you with the words of Joop Konraad:


About a week ago we put out the first announcement to get the attention of all of you lovely freaks out there. Which already garnered quite some results. Even though the deadline to send in your list of favorite albums of 2013 closes on December the 11th. We already received TWENTY-TWO lists in past days. Amazing! So send yours as well in the upcoming days; before the countdown of the Stoner HiVe top 20 albums of 2013 starts on December 12th... Send yours HERE. Do it. Otherwise this dude will come and kick your ass! Or so he claims…

Just to be sure here are the rules once again. It is a weighted vote count. But you decide how many albums you sent in and if they are in any order. You can send in 1, 5, 10, 20, 41 or 968 albums. They need to be released between December 2012 and now. When they are in no particular order they are all counted as high vote; but not as top three votes. Otherwise the points are cast in the order you put them with the top three gaining a few extra points. And you can vote for any album or EP you desire…

Check out the earlier editions to see the outcome the past few years… It has been a steady grower and we hope to exceed the amount of lists we received last year… Here’s us hoping it will happen… So let’s all dress up like Santa and start making a list; checking it twice… And find out who’s damn heavy and who’s got the detonating device… Err..!?

The lists are rolling in nicely! But let’s push the people around us into action. We can always use more. Said the sex addict to the alcoholic… Even though the deadline to send in your list of favorite albums of 2013 closes on December the 11th. And we start the countdown on December 12th; we would love to see the lists roll in even more… So send yours HERE. Cause even this guys is counting the days on his seven fingers!

See what's up on all the posts about the Ultimate Stoner HiVe top 20 countdown HERE !

Email ThisBlogThis!Share to TwitterShare to FacebookShare to Pinterest
Labels: 2013 Year in Review, News, Others, Stoner Hive