Exciting announcement off the newswire!!:

A Heavy Rock Legend is back:
LEAF HOUND TO RELEASE "LIVE IN JAPAN" ALBUM IN JANUARY 2014! 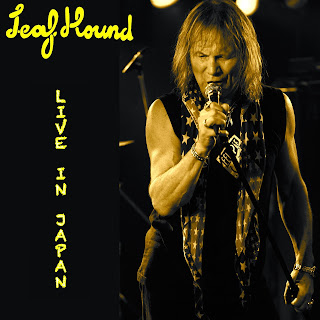 Leaf Hound’s “Growers Of Mushroom” album, originally released on Decca in 1971, has over the years become a bona fide worldwide cult classic of the hard rock genre, discovered by each new generation of rock fans. It has been cited as a hugely important album in the evolution of both the Heavy Metal and Stoner Rock genres, much like the first Black Sabbath album. Classic Rock Magazine has raved that “Growers of Mushrooms” is one of the most influential pieces of music on the stoner rock, and the album has gained a reputation as being one of the true lost gems of the early British hard rock scene. Original Decca vinyl copies are one of the most rare collectable rock albums out there with prices soaring above £4,000!

More than 40 years later after the release of that legendary ‘Growers Of Mushroom’ record, after numerous club gigs with acts such as Nazareth, Mountain, Orange Goblin or Witchcraft and festival appearances live at Roadburn, Sweden Rock or Desertfest in London, Leaf Hound are finally back! It was during a sweltering hot Japanese summer of 2012, heavy rock legends Leaf Hound were invited to make their first ever appearance in Tokyo, Japan. These shows were recorded and filmed for a limited release in Japan as a live album and DVD package by Captain Trip records in 2013. Leaf Hound have now teamed up with American label Ripple Music, who will be releasing the Leaf Hound‘Live In Japan’ Vinyl album and DVD/CD set worldwide in January 2014!


The tracklist of "Live in Japan" will include following legendary Leaf Hound songs such as:

Barricades
Freelance Fiend
Work My Body
Stop, Look And Listen
With A Minute To Go
One Hundred And Five Degrees
Evil

"Live In Japan" by Leaf Hound is set to hit the UK stores on January 13rd,
and will be coming out in Europe on January 14th 2014 via Ripple Music / Planetworks Enterprises.