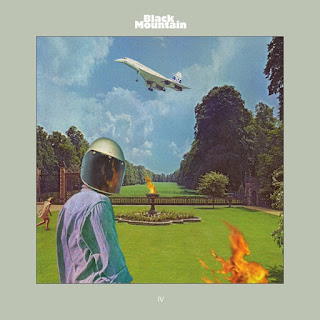 I haven't listened to Black Mountain in over 10 years, not since their debut, the one with the memorable tune, Druganaut on it. I only listened to the whole album once or twice and I remember being pleasantly surprised by Black Mountain because I didn't like Stephen McBean's other, earlier project Pink Mountaintops. Anyway, here we are years later, I've grown from a young outsider to an angry loner and Black Mountain has gone from a surprisingly cool local band to an internationally known and respected heavy psych / stoner band. I think I got the better end of that deal ...

MOTHERS OF THE SUN - In the meantime however, I've seen the movie Beyond the Black Rainbow which has a brilliant synth soundtrack from Black Mountaineer Jeremy Schmidt, in fact I've got the DVD right here. This album kicks off with a staccato synth over which glides a soulful duet. Three and a half minutes in we get our first riff and it's a good one. The synth and guitars here match the album sleeve art perfectly. The cover reminds of mid-career Pink Floyd, Technical Ecstasy and perhaps some Supertramp or even some Badfinger covers. It's the coup de grace of throwback moods.

FLORIAN SAUCER ATTACK - I'm always biased against Vancouver bands because this is such a hipster town and I don't know about your hipsters, but ours are incredibly snobby and arrogant. I mean, basically they're a bunch of beta-types that manufacture status by being extremely cliquish. Unfortunately most people can't resist the allure of being accepted into an exclusive group. I just say, fuck it, who needs ya? Songs like this just seem so "staged", if you know what I mean. It's hard to believe that a bunch of musicians in today's day and age got together and just jammed out a song like this. It's more 80's than 80's. Would have fit right in to the essential hipster playlist from 10-12 years ago when bands like Le Tigre dominated the underground dance clubs.

DEFECTOR - This one's got somewhat of a True Detective vibe to it. A little gospel-ish in places with a sexy night blues undertone. Not my cup of tea, but sounds a little more natural than the last one. At this point, I can see some of you out there thinking something along the lines of "uh oh, the angry loner's out of control here!" There may be some truth to that.

YOU CAN DREAM - But to be fair, I know this culture, I know where these people come from. They're more concerned with their daily costumes than the inside of their own heads. People who are so pre-occupied don't necessarily have anything to say. Fuck this. It's table flipping time. Angry loner has become raging creep!

... alright, no more ranting about hipsters. I only meant about 80% of that anyway, some of it was just said for effect. You decide which is which! Honestly though, I'm bored by this song. I can't really tell the difference between this and the last. The synthy parts are the real saving grace here. But again, that's me showing bias because I was such an enthusiastic fan of Schmidt's Beyond the Black Rainbow soundtrack. This album is starting to sound closer to the way I remember the first Pink Mountaintops album being. What happened to this band in the last 10 or 11 years?

CONSTELLATIONS - Also, I don't remember this band having a female vocalist. I mean, they might have, I just didn't remember them that way. This is a better song. Just crunchy guitar, drum, bass and cowbell. Unpretentious. This is what the whole album should be. Then the synth comes in, no problem there. Doesn't seem like they're trying to do anything in particular here, just get their groove on, which is what it's supposed to be about. End of, you're supposed to feel what you're creating. Creation isn't a totally intellectual enterprise, some of it is sextremely libidinous. And that's a good thing. Definitely courting a Heart, Loverboy, Streetheart or later-Chilliwack affair on this one. I'm into it.

LINE THEM ALL UP - Here comes the folk rock section of the album. Some cool feels here, the synth gliding in and out always provides an ominous overtone to even the most pastoral tune. Like if the bad guys in The Sound of Music were Terminator robots. If you know me at all, you know I hate slow songs ... but I don't hate this at all. Wait, is that an accordion I hear? Maybe? Not sure. I sat-in once or twice on the local radio show Accordion Noir back when. That was fun and the guy who hosted it was cool as shit. He looks like an uptight guy but isn't at all. Forgot all about that til just now actually.

CEMETERY BREEDING - At this point it's becoming clear to me that I prefer the female vocals. I didn't mention they have a boy/girl singing duo in this band. Very jangly guitar on this one. Some kind of out-of-body XTC vibe here. Not the worst tune on the album, but not really my cup of tea. Schmidt's contributions are definitely the most interesting part of this band ...

(OVER AND OVER) THE CHAIN - ... There's no doubt about it. Even this three minute long mostly droning and monotonous atmospheric ramp up is interesting. Some heavy guitars coming in with a bombastic riff. I want to say the riff is Barbarian Pomp and I mean that in a very good way. Sounds like a lost track from the Conan the Barbarian soundtrack. Kind of a slow song, but this one has won me over. Picking thing up a little bit here slowly ... and a long, slow decay.

CRUCIFY ME - I don't know, call me crazy, call me stupid but I was expecting riffs. That's what happens when you've got ignorance. I've got to admit, I was hoping for 10 Druganauts. I'm this band's worst nightmare. They would roll their eyes at me in an overly theatrical way. But I'm more surprised that the Canadian indie rock scene is still stuck in the days of Broken Social Scene and Arcade Fire. I figured that Canadian hipsters united would have moved on by now. I really did. Finally, three minutes in and only a minute and change to go and the song finally starts. Oh there the drums drop out again. Who likes this stuff?

SPACE TO BAKERSFIELD - More slow jamz. Long ways to go yet on this song. Could you imagine seeing this live? Everybody standing around with their arms crossed, some swaying back and forth, some nodding along with their eyes closed, all feeling at one with the universe for brief shining moments of peace. Shudder ...

Overall this album is like what if Pink Floyd had recorded Obscured By Clouds later on, like between Wish You Were Here and Animals? But instead of Pink Floyd it's Broken Social Scene or Arcade Fire as the band doing it. I'm sure there's a better way to say that, but I don't care. This album wasn't a complete waste of time, but I know now that I'll never listen to this band again. It's not for me. I think this album might be for people with low-testosterone.
Posted by LK Ultra at 11:32 1 comment: Links to this post