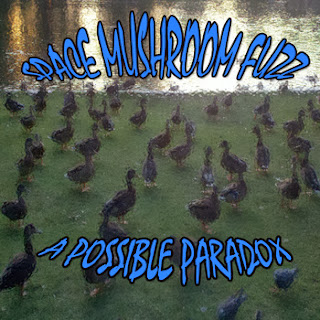 The name says it all, no false advertising here.  The New England duo embodies the spirit of all three things in equal abundance.  They play Space Rock with classic rock overtones, but their songs don't drift endlessly in the drone of the void, it's an earthy brand of space rock.  They fall from the beyond and land squarely in the dirt, tilling the soil weirdly.  The band isn't beholden to Lovecraftian themed lyrics, but the music they produced is so much more faithful to the mood and feel of some of the revered author's most hallowed tales than other Lovecraftian-themed bands that it becomes a near perfect launchpad from which to describe them in terms of sound.  It's as though the wandering muse of H.P. Lovecraft has taken up residence in the amps, cables and drumheads of Space Mushroom Fuzz, evoking the spitting image of the author's famous fungi, fungi which comes down to earth from Yuggoth and takes root in the ground.  We spend a lot of time down there, us listeners, beneath the surface of things, moling around, branching and spreading out.

'A Possible Paradox' is the band's fourth album since their debut in June 2012.

The album kicks off with a blast of fuzzy ascending riffs, driving drums and backwards recording, SMF main man Adam Abrams creates counterpoint with his distinctively robotic vocals.  The title track's kitchen-sink attack pummels before you even know what hit you.  The next track, "For a Lifetime" is classic Space Mushroom Fuzz, if such a label as classic can be applied to a project a year and a quarter old.  Of course, in those 15 or so months the band has released over three hours of music.  Many bands go full decades without offering so much.  A huge part of SMF's sound and appeal comes from the cold blue tones of the synthesizer and its juxtaposition to the warm red churning fury of the fuzz guitar.  Rarely has this modus operandi been more successful than on "For a Lifetime".  Each instrument vies for our attention over the course of the 'main part' of the song, but the synth never touches the boundaries of the extended guitar solos near the end of the track because the battle has been won.  The outcome is satisfying because SMF knows how to lead and direct the listener's attention with expert grace.  The ideas flow, chaotically on the surface but with their own inner logic that can only be felt but never understood, not by us.  It takes Abrams and John Belcastro (drums) to understand these inner workings.

Of course, the synthetic beast is never truly defeated.  It keeps rising over and over again like a polymorphous nightmare creature from the frozen wastes of the antarctic tundra.  This deathless horror rising imagery is particularly vivid on instrumental track "Forever Lifetime" as it doesn't take a terrific imagination to see the thing without a name screaming back to life in rising towers of malleable matter to do battle once more with the flame-throwing guitar, which is probably at its most pyrotechnic, pendulous, pungent and potent towards the end of this song.

"Sunshine of Your Dove" is more than just a punny title.  The bands shapes and molds time on this track like a wad of clay, creating tremendous drive and heaviness.  They take time and slow it down before finally launching back into outer space with closing track "Falling Upside Down", the fuzzy mushroom's work here seemingly done.  The planet has been infected.  I hear it on good authority that the tireless duo is already hard at work on album number five, tentatively titled 'Stealing Some Time'.  I think it might have been taken here from "Sunshine ...".  One simply marvels at the prolific outpouring of ideas.

While you're digging into this one, seek out 'When Time Trippers Collide', 'Something Weird's Going On', the "Trapped in the Past" single and the magnificent 'Man in the Shadow' (and its companion EP 'Marty's Original Escape').  All of these releases and 'A Possible Paradox' are available for free (or pay what you want) on bandcamp and available as inexpensive CDR's.  I highly recommend this band, the three hours you will spend investigating the mushroom field will be spent in the presence of catchy riffs, hauntingly robotic melodies and mind-bending soundscapes.  At the very least it may make for the most weird musical weekend of your brief life (before the fungus takes over body and soul completely).

Highlights include: "A Possible Paradox" and "For a Lifetime"

Reminds me of: Hawkwind, H.P. Lovecraft, John Carpenter's The Thing, The Fungi From Yuggoth