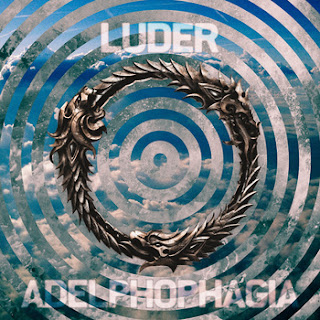 Luder is really a strange beast, one of the stranger entries in the Small Stone label's roster of bands.  In many ways it's a monster, though not terrible to behold.  The songs are far too long to be considered pop, and the songs are too poppy to be considered heavy psych, the band occupies a little pocket of reality all their own.  It's a place of brightness and gloom, a place where opposites attract and like forces repel.

Dream-like melodies glide on swaying rhythms.  'Adelphophagia' features an expansive sound full of darkening blue skies after sunset.  There's a camera zoom quality in effect at times, zoom in, zoom out.  When Luder zooms in, low hanging clouds roll in creating pressure and feelings of calustrophobia and a foreshortening of the world.  Possibilities have ends and even skies have limits, limits which can be halved at a moment's notice.  Zoom out to reveal a reversal of the effect.  It seems the 'camera' is operated by drummer Eric Miller, here, who provides much of the point / counterpoint while the rest of the band plays on, it's up to him to provide commentary and close-up shots or gorgeous landscapes depending on the tempo and urgency of his playing.  The world of Luder is one of being wrapped in warm blankets and tossed off a bridge into ice cold water, unable to escape, locked into a groove, trapped in sound.

The zoom effect is also effected in the middle sections of the longer numbers of 'Adelphophagia'.  Three of the nine tracks in total reach for or exceed the nine minute mark.  Like true sound junkies, Luder won't rest until every nook and cranny of a composition is exploited to its limit and they give you your money's worth with over an hour of music to explore.  Album opener "Never Liked You" is the shortest cut at 4:27 which may give you an idea of what this album is made of: darkly inviting vocals courtesy of Sue Lott, a minimalist approach to structure while wringing out every last drop of inspiration from a tune.  It's not a bad way to go about it and leads to some truly inspired improvisational moment, such as on "Ask the Sky" and "".

Much of what Luder does is understated.  "Dirge" provides a strong example of this.  Just as the song is reaching a peak in the chorus and shit is about to bust loose, the drums begin to drop out and the updraft of this parachute opening effect creates a huge rush (though, an understated one).

An excellent way to get to know what Luder is all about is to listen to their take on David Bowie's "I'm Afraid of Americans".  Where Bowie's original was robotic and industrial, Luder's cover version is wispy and ethereal, not quite a man/machine dichotomy, but machine/spirit seems to fit the bill nicely.  'Adelphophagia' is full of ghosts, perhaps the ghosts of those titular brothers who have been eaten, ghosts who cry out not for revenge or rest, but exclaim with the joy of discovery.  Luder tells us that the world beyond is not always a scary place, although it can be.  That there is a serenity in letting go of control and letting the current pull you along.  There's no clearer statement of this than on the song that closes out the album, "Remember What I Said".  Turn off you mind, relax and float while listening to Luder.  They all float while listening to Luder.

TIME IS NOT YOUR FRIEND

Highlights include: "Never Liked You" and "Remember What I Said".