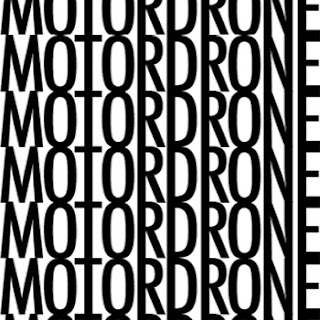 Fascination with "the road" is a peculiarly American past time.  In post-war 1950's America, a booming economy put teenagers behind the wheel creating a "car culture" that their depression-era parents never knew.  The car began to symbolize the coming of age and to a much truer degree, freedom.  The road was the medium of that freedom and one would be hard pressed to find any stretch of pavement from Portland, Maine to Portland, Oregon that hadn't felt the caress of a youngster's tires, just because.  It's the journey, not the destination, right?  In Europe, all roads led to Rome, like an inescapable trap (how un-American is that?), in the Wild West, the road was a hot blast of sweet chaos.  Motordrone comes from this place, where the rubber meets the road.  But don't expect to hear the very essence of ice cream floats, drive-in theaters and bobby socks here, Motordrone is the kind of band that picks up hitchers and uses them for playthings, goes off road and, hell, probably runs with scissors when not out chasing thrills.

'Motordrone' is the sonic travelogue of a breakneck terror ride.  Motordrone drove to the frayed limits of experience and came back to tell us what they found there.  And the story is vivid.  "Red Velvet Sofa" feels so much like cruising down a dark highway that you don't even need to close your eyes to picture it.  The picture forms naturally in the mind.  It's a dark sound, yes, but it's warm and inviting.  It thrills you with the prospect of real danger.  It's a red light symphony in the back seat.  Incendiary guitar and apocalyptic bass mingle and entwine intimately in front of your startled eyes, and let me tell you campers, it's positively indecent.

Sweat starts to form beneath the hoods and leather jackets of "Outlaws & Renegades".  One such, has taken a ride with the band.  Before long, a sickening feeling pours over the lucky hitcher like an ooze.  Oh, the lucky hitcher doesn't understand his fortune just yet, but that's what's so sickening about that feeling.  They are getting there.  Hooks reel up the corner of the mouth, ever so slightly at first, almost imperceptibly.  Motordrone doesn't allow for something so passive as voyeurism in their midst, one either joins in or becomes the target of their next crime wave.  And once you're already in the back seat, you might as well invite the demon in, before it attacks you from without.  There's no fighting it anyway, "Motorpschedelic" is the most menacing thing you'll ever hear.  At least, you'll swear it is as it drones over the speakers from the backseat.  And so a knowing smirk rises.

And they drive.  The car just goes.  By the time "Cloud 9" struts across the airwaves the lucky hitcher's smirk has mutated into a full-blown wolfish howl of excitement, as he punches the ceiling.  This is how insistence and persistence pays off for the band.  Dark tones of fire set a lewd stage for dual lead male-female vocals which amount to nothing less than a ritualistic chant.  Music of the night.  Songs go from point A to point B and back again, one song after another, mile after mile, day after day.  That's why this is perfect driving music.

So it goes.  It goes and goes and goes.  A two door death machine, you in the back seat sitting bitch between a pair of laughing psychos and up front, an oddly calm driver in sunglasses smiles serenely.  You'd crawl out the window, tuck and roll to safety if this snarling beast on wheels ever slowed down.  But it won't.  It goes and goes.