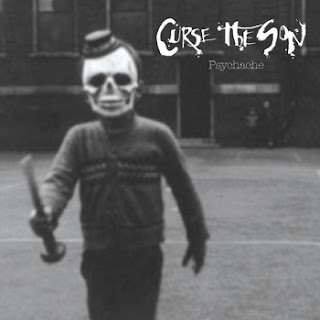 I'm a fool for soaring harmonies and the pendulous arc of the swinging doom riff.  Therefore, I'm an absolute drooling moron for 'Psychache', the second album from Hamden, Connecticut trio Curse the Son.  Would you laugh, point fingers and spit at me if I were to admit that I didn't like their 2011 debut 'Klonopain' when I heard it on bandcamp oh so many months ago and so slept on 'Psychache' for the better part of a year?  Yeah, I would too in your position.  Maybe I didn't listen to 'Klonopain' closely enough, maybe I wasn't ready for it, maybe 'Psychache' is just that much of a step forward for the band,  I don't know.  Either way, I'm here now and I'm ready to make amends, if you'll let me.  Better to be fashionably late than to never arrive at all, am I right?

The album grumbles to angry life on "Goodbye Henry Anslinger", named for a prominent campaigner against marijuana during the 1930's.  Those soaring harmonies and pendulous riffs I mentioned in the introduction?  Curse the Son waste no time stuffing them down your eager gullet.  It's a stunning example of building up a furious head of steam during the chorus with vocals then gearing down with an ever deepening descending downtuned riff.  The whiplash effect will have you flipping ass over head through the windshield.  Your pulped and shattered body lying in the middle of the road had better be ready for the next assault because it comes quickly and when it does, it's a doozy.

Bludgeoning and belligerent, "Spider Stole the Weed" begins life as a corpse-dragging uphill march of awesomeness over sand dunes but morphs suddenly before your very ears into a screw-turning, odd-meter pile-driver of even more awesomeness about half way in.  The first couple times I listened to this album, I did so in an off-hand way, not listening too terribly closely, but letting the feel of it sink in.  Each time "Spider Stole the Weed" came to an end, I found myself asking how many songs had just passed expecting three or four to have gone by.  Nope, just two.

From here, Curse the Son really start to come into their own as the mind-bending riff attack of Ron Vanacore takes over completely.  It's this ability to turn a riff on its head from one moment to the next where Curse the Son gets the bulk of their charm.  Actually, Vanacore can't take all the credit here because the tempo-changing guitar antics would be nothing without the sympathetic ear of drummer Michael Petrucci pitching in full bore.  The interplay between these two is the cosmic matter that legends are molded from.  Title track "Psychache" and "Spider Stole the Weed" are excellent examples of this complex and oh so beautiful interplay at work (listen on the player below [come on do it {I dares ya}]).  "Somatizator" turns in another sparklingly filthy riff and vocal performance.  This time the harmonization come in at a lower register to create a moody, demon haunted feeling which lingers and helps transition well into album closer "The Negative Ion".  Easily the darkest of the six tracks on 'Psychache', it starts off with the midnight blue tones of a Geezer Butler like bass line courtesy the man they call Cheech.  The song then opens up into some of the slowest, corpsey-draggiest and most epic moments on the album all leading up to an eerie understated finish.

So now I've heard it.  Don't ask me why it took so long to find out for myself how amazing this band really is.  One thing's for sure, 'Psychache' is a winner from top to bottom.  For the longest time this album was streaming only as the band tried to find a label to help with physical releases, but it has been available to download from bandcamp since late July, which seems to have knocked this album prominently back onto the collective radar screens of my fellow reviewers.  It's because of them, and this album's appearance at #14 on the most recent Doom Chart that this album sprang to my attention.  Once heard, it could no longer be ignored or denied.  'Psychache' is still available at "pay-what-you-want" prices (minimum = $0), so don't miss out on what is clearly one of the best doom albums of the year so far.

Highlights include: "Spider Stole the Weed" and "Goodbye Henry Anslinger".

Reminds me of: Diesel King, Pilgrim

Curse the Son on facebook
Posted by LK Ultra at 19:07