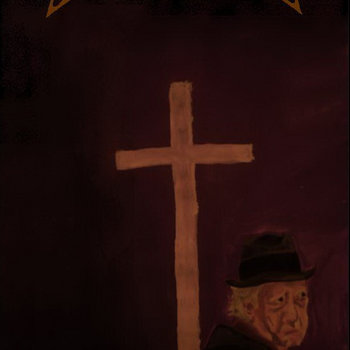 Aniara is another great discovery from that seemingly inexhaustible source of excellent bands, Youtube.  The band plays a flawless style of grinding traditional doom with energetic vocals that sometimes break down into a high pitched scream (see "Into Our Coven")!  Energetic and beefy, the band mostly sticks to a midtempo setting and explores their sound across four worthy numbers on their debut EP, 'Caress of Darkness'.  The cover image from bandcamp is obviously cropped and comes from the tape which is available through the band by contacting them at their email address: aniaradoom@gmail.com.  The band was once called Oak, but they renamed themselves with the release of this tape.  Oak is a great name but they did well to change it because it's a little too generic to stick out or even search for for that matter.  They probably changed it though because of the various other metal bands named Oak was leading to some confusion, but that's enough speculation for now.  My buddy Haris from Welcome to the Void blog was already onto these guys months ago (back when they were called Oak) and you can read his post here (it's in Greek, but you can always use the translate function to the right side of the page if you have to).

This is one of those bands, that when you discover them on a place like youtube, there's no indication as to what year or era they are from.  They could be a few years old or they could be a decade or two old or more or they could be a new band.  They are indeed a new band with a timeless sound.  Darkness and doom with muscular traditional heaviness, when Aniara's sounds caress your ears, oh yes, it's crushing alright.

Opening track "October Sunrise" is slow, slow doom.  The riffs travel about as fast as the sun itself rises, which isn't very fast at all.  This is one of those songs that gets by on its looks and how it feels.  We all love the big catchy hooks, but fans of straight doom metal can get off on just the plain doominess of a song alone, some can anyway.  I'm one of them/  All the pieces are in the right places.  Pleading, manic vocals in the traditional style help push this one over the top.

"Into Our Coven" was the first song from this band that I heard.  As I alluded to, I found it on youtube on a sidebar link.  Damn, am I ever glad I did.  This is the track where all those pieces that are in their rightful places come together to form a monster sound.  An insistent riff that chews you up like a motor boat propeller and some high pitched screaming from an excited vocalist in the form of one Witchfinder Ågren, a rippin' ass guitar solo, damn man, this one's got it all.  It's one of those songs that when you hear it you go, "oh yeah, this is what doom metal is all about" as you laugh all the way to the blood bank (everyone's still listening to Diesel King too, right?  It's not just me?).  These guys know how to follow up too, with a song that's got an even better riff, if not as memorable a vocal performance.  Still the vocals are pretty memorable in their own right on this one as they are everywhere else on this 4-song 25 minute EP.  The follow up in question is the closing / title track.  Dilapidated, tall and narrow mansions haunt the mind's eye when this song rolls in.  You know, the ones with dead tree branches scratching at every window and all of them have their curtains drawn.  The kind that fraternity pledges used to be forced to spend the night in in old horror movies and comics never to be heard from again.  This is a close second to "Into Our Coven" for the "this is what doom's all about" award.  It transports the listener to the nightmare dimension.

Aniara might not blow you away, but then again, they might, and that's why you should check them out for yourself.  "Into Our Coven" blew me away initially so I set myself to the task of finding more Aniara.  Once I did, "Caress of Darkness" blew me a little further away.  The more of this kind of music I can find the better.  This disc abounds with organic and foresty moods in darkness to receive the caress of doom.

Highlights include: "Into Our Coven" and "Caress of Darkness"