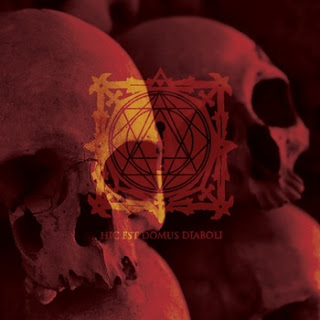 Your eyes flutter.  Confused thoughts race and spin adrift as you begin to awaken.  Your mind is a cloud of thick ash but no thought could conceal the headache that feels like half your skull is crushed and missing.  Your back feels wet but it's only the cold of the stone floor of the mausoleum seeping in.  Something rumbles deeply.  You quickly get up and race to the door but it does not open.  The tomb is sealed, the windows barred.  The dust which litters the place begins to stir, little flaked off bits of skin, mementos of a life now gone, whirl in busy little cyclones as though pushing against all odds towards a second life.  The thousand pound lid of the sarcophagus slides from its mount and crashes into dozens of pieces on the ground.  The once human figure within arises, slowly, stiffly, achingly ... hungrily.  Hungry for life ... your life.  It's dried lips have pulled away from teeth in a grotesque grin.  Indeed, it is happy to see you.  You're in 'The House of the Devil' now ...

Cult of Occult's first full-length album is the sonic equivalent to being locked in a tomb with a hungry corpse. Words like brutal, punishing and devastating come to mind, but they aren't the right ones.  The kind of tortures the band inflicts on ear drums are far subtler than that.  Sinister, dark, evil and abrasive are perhaps closer to the mark.

Comprised of five masterpieces of doomed sludge, with each piece for the most part clocking in at over 10 minutes (plus a quick three minute instrumental interlude making up a total of six tracks), 'Hic Est Domus Diaboli' is an unceasing work of shambling, sinister, dark and abrasive evil.  This is the music hungry and vicious corpses would make in nightmares. 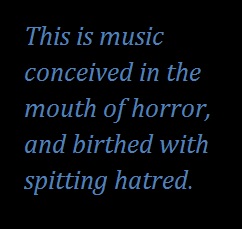 For seventy awful minutes, Cult of Occult burrow beneath the skin, take a blood vessel express directly to the brain and proceed to wreak havoc.  "In Vino Veritas" kicks off the album with a wall of distorted feedback, the tone of which falls across the rest of the album like a shadow of spreading lava.  For the most part 'Hic Est Domus Diaboli' is made up of incredible riffs played incredibly slow, riffs that moulder with the stench of decay.  And yet, through vigorous performances, there is a liveliness to the affair, a liveliness that begins with the compositions themselves.  Not a moment is wasted here, all songs are exploited to their fullest potential, the band is single minded in their vision as they trudge through a fuzzy potboiler of hellish proportions.  Riffs are drawn out but are untiring in their trek, they would walk across miles of putrefied earth to get inside your skull and ultimately, they succeed.

"Opus Ad Odio" takes the hellish feelings of dancing flames felt throughout the rest of the album and snuffs them out, plunging the listener into an underworld of darkness dominated by bass and distorted spoken word passages (in what sounds to be Latin).  The song is a morass of confused souls, wailing in shadow.

All song titles (as well as the album title) are in Latin, if one could distinguish the lyrics through the ripping vocals, it would be interesting to hear if they too were in Latin.  Though the vocals are extreme, they are not harsh and do not grate on the ears as so many other screamed vocals do.  This may have something to do with how the album was mixed and mastered with the guitar soaring sonically above the rest of the instruments and also to do with the sympathetic tones of the strings and vocal chords. 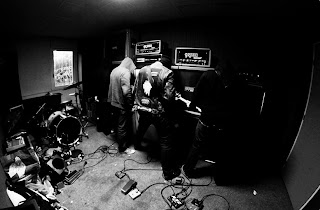 If this album has a patron spirit it is a three-headed foam slathering beast of the devil's third.  This is music conceived in the mouth of horror, and birthed with spitting hatred.  As for the band themselves, they like to remain relatively anonymous, though not self-consciously so, simply allowing the music to speak for itself.  This album is not to be missed for those who like their doom riffs to be both classic and epic and their sludged out soundscapes to be unforgiving.  'Hic Est Domus Diaboli' will rake you across the coals.

Highlights include: "In Vino Veritas" and "Pro Diabolus Mori"

Reminds me of: Moss, Shallow Grave

Cult of Occult on facebook
Posted by LK Ultra at 19:14