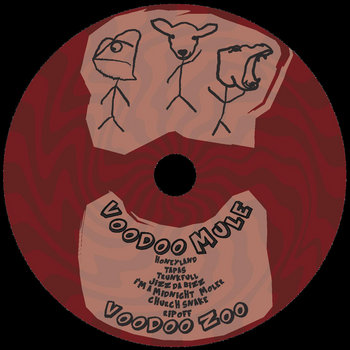 The first time I reviewed an album for somebody else's website it was Harvester's 'Blind Summit Recordings' for Stoner Hive (see the very bottom link on Reviews Appendix tab).  I had already reviewed it for my site, twice(!) but I didn't want to rock the boat by refusing my very first review offer, thus revealing my very Canadian politeness (It would take some hard-digging research to confirm but I probably hold the world's record for most published reviews of 'Blind Summit Recordings').  But I've always wanted to keep my Paranoid Hitsophrenic and outside work lives separate.  'Voodoo Zoo' is an album I reviewed recently at the Temple of Perdition, but I did want to bring it to the attention of PH readers because it's more than worthy of institutionalization, so, never one to repeat myself (...okay once, er ... twice), I bring you this Voodoo Mule feature.  Don't let the lack of proper album cover artwork fool you, this is hot stuff!  Consider this fair warning!  Don't miss ... Voodoo Mule's 'Voodoo Zoo'.  (PS, I'll be pulling double duty again with a PH feature / Temple of Perdition review later this week with another band ... stay tuned folks!)

BIO:
Slovenian stoner rock/doom metal/sludge band Voodoo Mule just self-released their long awaited debut album called Voodoo Zoo. More copies will be out soon by legendary Croatian d.i.y. label Slušaj Najglasnije. Voodoo Zoo was recorded and produced by Rok Zalokar.Tracklist:01 - Honeyland02 - Tapas03 - Trunkfull04 - Jizz Da Bizz05 - I'm A Midnight Moler06 - Church Snake07 - RipoffYou can now listen to full-length album and also download it for FREE at their Bandcamp:http://voodoomule666.bandcamp.com/album/voodoo-zooPsysical copies are available for 5€ + postage via email: jutubemula@gmail.com"A hybrid with an error, a not so clever idea gone worse, a menace that bucks you off with a hint of voodoo from under a tophat black... With a hint of sugar, spice and everything nice, that is how this sonic behemoth came about.
The idea behind Voodoo Mule was a simple one, no indie, just loud and filthy. These are the secret ingredients that bond together an ansable of three with Hippopotamus on drums, Iguana on bass, and Jagnje on guitar and vocals.
This is the form in which we`ve been working since March 2010 and performing since February 2011. We made our first recordings in February 2011 when we imortalized our first three songs that formed our first officialy unofficial demo that blogers labeled it to be stoner rock. Since then we have covered our homeland Slovenia throuout and our hometown Ljubljana several times as well, with disturbingly loud riff driven rock shows. Just cuple of highlighted shows were at Festival Lent, Paranoid Piknik Open Air, Metal Mania Open Air and supporting bands like Count Raven, Karma To Burn, Pagan Altar, Jucifer, Suuns, Rozbub and many many many more.
Our plans for the future are as simple as the basic idea that holds us together, play loud, play out, stay filthy and respect your roots."Voodoo Mule is:Jagnje - guitar, voxIguana - bassHippo - drums https://www.facebook.com/voodoomulehttp://www.reverbnation.com/voodoomule

From my Temple of Perdition review:

"Slovenian trio Voodoo Mule is heavier and filthier than most stoner rock bands.  The fuzz flows thick and viscous, just the way you like it, downtuned all the way to hell which must be where their swaggering groove riffs originate.  They play slow enough at times to be classified as stoner doom, but for now we’ll just call it thick bottomed rock n roll as a foundation.
These boys play around with their riffs like a hungry cat plays with a mouse, improvising mid-stride and batting the thing around with pick-handling paws.  1000ccs rumble from the exhaust pipe of a Kyuss-made green machine with black (sabbath) trim.  One song flows into the next the way mercury travels through the brain, devouring all in its path."

But, as always, don't just take my word for it, listen on the player below and judge for yourself, hit the download button and pay what you like on bandcamp, you'll be glad you did.  I am ...