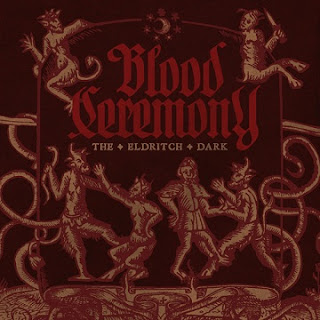 It's all one needs to know about the band really to let them know that Blood Ceremony is one of those bands that is so far removed from a metal sound that it makes them twice as metallic.  Like when Goths give themselves their own 'Goth' name it's always something like ... I don't know ... "Tearspiller" or "Rat-Eater" or something, but every now and then comes a being so dark, so depressed, so made-up and dressed in black that this brooding creature can only go by the very un-Goth handle of ... "Betty".  It's an inversion you see.  Like an upside down cross.  It's the same spirit the flute brings to bloody ceremonies.

Basically, the use of flute is Blood Ceremony's most obviously identifiable and defining characteristic.  The other is Sean Kennedy's big, bad Sabbathian riffs.  2011's 'Living with the Ancients' saw the band move slightly away from the flute at times and go for more of an organ sound (both instruments are played by vocalist Alia O'Brien) and also deeper and darker into the cellar of Doom Metal.  'The Eldritch Dark', the band's third full-length album, sees the band veer sharply into folkier territory, featuring more flute than a renaissance fair and even some violin for good measure. It's the natural and logical direction for the music to go into.

From the off, album opener "Witchwood" finds the band exploring less dark and heavy territory, which was the overwhelming mood of 'Living with the Ancients'.  A third asset the band has always had aside from flute and riffs galore has been Alia's tremendous ability to snake her way into the listener's brain with infectious vocal melodies, another overwhelming impression left by Blood Ceremony's last effort.  "Witchwood" pulls the organ out of storage and dusts it off once more to pave the way for another of "riff master general" Kennedy's cyclopean figures.  The fourth asset of Blood Ceremony is their proggy nature.  It would be one thing for this band to be able to stick out like a sore thumb if all they'd given listeners were boy-girl love songs with big riffs mixed with flute in an unadventurous song structure, they would still be cool sure, but they become a different beast entirely by giving the listener more, by telling a story and doing it in style.  Progginess seeps out of the pores of this record like sweat, and looms over everything like an ominously eerie and dark cloud, giving way to some classic rock sides that aren't all Sabbathian.

"Lord Summerisle" really captures the mood of Paul Giovanni's soundtrack for The Wicker Man (1973), the (amazing) film the titular character of the song is taken from.  If memory serves, this is the first duet the band has done.  Bassist Lucas Gadke provides not only the main instrumental component of the song but lead vocals as well, with Alia riding shotgun providing the harmony.  Actually, there's a palpable Moody Blues feel to this song with wind-swept vibes providing accompaniment.  The Wicker Man soundtrack feel spills into the next track, "Ballad of the Weird Sisters", even more so.  By far the folkiest track on the album, it actually has much in common with Bob Dylan's mid-seventies albums such as 'Blood on the Tracks' and especially 'Desire'.

It's this folky / proggy emphasis that provides the album with its dark appeal.  We don't often associate folk and bright sounding instruments like the flute and violin with darkness in music, but what Kennedy's riffs don't slather in shadow, O'Brien's lyrics smother in sinister kisses with poisoned lips.  She can suggest things even without explicitly saying or showing them, which makes the album all the darker, because the listeners fill in the blanks in their own minds.

"Drawing Down the Moon" is probably the most "pure Blood Ceremony" track on the record but even then there's a folkiness to it that cannot be denied.  The thing that makes Blood Ceremony's folk leanings unpretentious to the listener is that they're not trying to be a metal band, there's no double kick to wrench you from the storytelling, and the band can only do what a regular traditional rock band can do, with no crazy set-ups, only they do it heavier, much, much heavier.  They do it heavier not just in terms of sound, but in mood.  It's a "heavy vibes" thing.  Vibes made more evil and sinister by the folky nature of the compositions on 'The Eldritch Dark'.  When listening to this album I see the devil cut in wood.  I hear whispered tales of forbidden things in a puritanical age.  I see the guilty accuse the innocent.  I see evil in broad daylight, which is somehow darker than evil at midnight, isn't it?

After the short instrumental "Faunus", the album closes with "The Magician" a song that charges down the same tracks as "Oliver Haddo".  In fact, The Magician is the title of the book that the character Oliver Haddo is taken from.  It was written by W. Somerset Maugham and published in 1908 and I have it on my shelf, a purchase inspired by Blood Ceremony, so there you go.  The character of Oliver Haddo was inspired by a brash young wild-eyed upstart occultist that was circulating in British social circles of the time by the name of Aleister Crowley.  Just had to throw that out there, it's a great song too (so is "... Haddo").

There are a great many bands and albums out there with a truly genuine 'vintage' sound.  Kadavar's 'Abra Kadavar' is one, with a specifically hard rock feel, Purson's 'The Circle and the Blue Door' is another.  It sounds like it really could have been released by the Vertigo label in early 1971.  New band Demon Eye (for specific reasons, stay tuned for their review coming soon) ... the list could go on, Ape Skull, The Tangerine Stoned.  Chock up 'The Eldritch Dark' in this same category.  What makes it stand out among the pack is its neo-acid folk stylings melted across the flaming grill of Kennedy's fretboard.  You won't hear anything else like it, not even in the band's own back catalog.

Highlights include: "Drawing Down the Moon" and "Goodbye Gemini"

Better Reviews:
Temple of Perdition
Bloody Good Horror
And see my proudest moment of them all, when I published the first ever written review by Soggy Bog of Doom podcast host, Soggy Bob.  It was about this album, see #20 on the link below!
Soggy Bob on the Doom Charts