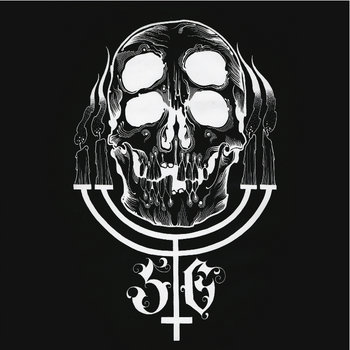 THE BUILD-UP:
One of the better things going in the world of doom right now is New Zealand's Shallow Grave.  Their self-released full-length debut is an incredibly dark and suffocating affair with ambient drone passages whereby the listener becomes momentarily lost in an eerie fog.  But this band isn't just about the drone, 'Shallow Grave' is fully loaded with six excellent and fully fleshed out songs of equal quality.  The music is slow from a death metal perspective but is actually pretty busy from a doom drone perspective.  It's tough as nails and I suggest checking it out in a big hurry.  Of course, as always, the requisite links will all be posted at the end of the interview, including the media player so you don't have to take my inadequate word for it, you can check it out for yourself.  I've been listening to this a lot lately but do take my word for it when I say that the album becomes a dark addiction.  For now, let's get right to my conversation with the band.  My questions are in blue, their responses are in white ...

I’ve been digging your album a lot recently, from the cover art on down, it’s a complete package of doom drenched darkness.  How important do you guys think an effective album cover is in an oversaturated market where potential listeners may only have an album cover and the briefest of descriptions to go on to make a decision to give a listen?

Aesthetic is extremely important to any band that’s worth giving a shit about. For the cover we turned to a friend who goes by the name of Mark Tumaru (works at Sacred Tattoo in Auckland) as he is the master of doom and gloom when it comes to artwork. He knows exactly what we’re about so we left him to his own devices and it definitely payed off as far as we’re concerned.

Cover art and aesthetic is just as important as its always been, no more, no less. The only difference is thirty years ago you'd be flipping through LP's in a record store, these days it's images on a screen, but that's no reason to make concessions. The best cover art is always going to be that which captures the music better than the others - case in point, the first Black Sabbath record, or Motorhead. Those covers look exactly how the albums' sound, that's when it becomes iconic.

I think atmosphere is the key to this album.  Was there some special technique you used to establish the atmosphere during the planning or recording of the album?  Or is what I’m hearing a natural result of what happens when you guys get together and flick on the amps?

We planned it out pretty meticulously. When we formed the band we decided we would spare people the customary release or two of 'figuring out what the band is all about' and make a more confident initial statement. So we were laying the groundwork for a good 2 or 3 years of trial-and-error style experimentation previous to recording the album. Focussing on a horrific atmosphere was always the primary mission, so it's just a matter of refining it over the years.

Having said that, there's always a few happy accidents when your recording and writing tunes, and they usually end up being the most genuine contributors to the overall atmosphere. So, we've been making an effort to keep the songwriting loose enough for those elements to occur naturally, while steering well clear of jam-band territory. The songs end up sounding a bit more 'lived in' and when we nail it there is a pretty awesome feeling in the room. Most of 'Nameless Chants' from the album was written this way. 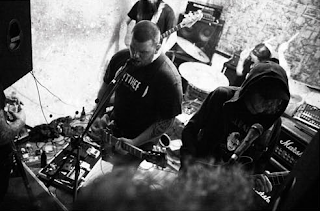 One of the major components of the band’s sound, and talking about the atmosphere again, are the droney passages that permeate the album.  For example, at the end of opening track “Devil’s Harvest” leading into the opening minutes of “Chemical Fog”.  It’s hypnotic and sets the listener up like a jab for the devastating crunch that’s about to come.  Are these conscious decisions that are being made by the band or is it something more mysterious like an inborn feeling coming out?

That section was a drone thing we were playing live at the time as a bridge between songs in the set. We liked it and it worked well live so we decided to put it to tape and let it do a similar thing on the record. The live version is a lot more distortion-drenched and face-melting, but as you say, the studio one works because it has this mysterious spine-chilling thing going on which sets the listener up well for the subsequent punch to the gut.

We're all pretty big fans of albums that consume you, where it all fits together and has this big overall effect on you. It's definitely a conscious decision to try and get that. We take a lot of care with the arrangements of the songs to ensure they always seem to be going somewhere, and there's no reason why the same principle should not be applied to the album as a whole, or to a live set as a whole. It's trying to get that sense of there being a hidden narrative buried under all the filth and chaos.

How involved are you guys on the national scene.  I know New Zealand’s not the largest country in the world but there are some fairly large distances involved traveling around.  Do you get to see all the bands you want to see?  There are a ton of great folks on the North Island in bands and involved in the local music scene like Craig Hayes and the guys from Arc of Ascent and Beastwars.  Is it a community spirit there?

Bands who live in Europe or the States have it pretty lucky. If you’re from the arsehole of the world you gotta save up a fair amount of cash to even travel overseas, not to mention all the logistical problems of playing over there, but it can be done. Wellington's Meth Drinker are over in Europe at the moment sludging up a storm and the Ulcerate and Witchrist maniacs have had a lot of overseas success. In terms of bands coming over here, we've been lucky enough to share a stage with Kylesa, High on Fire and Dead Meadow here in Auckland and seeing Sabbath a few months back was incredible.

There's always been way more great bands than there should be coming from NZ (given our population is a blip on the world scale) and something about our country seems to produce bands that operate at the most extreme end of the musical spectrum, it's ingrained in the culture. Craig from Arc of Ascent released the CD of our self-titled record on his Astral Projection label and we've got allies in most big cities around the country so there usually a place for us to crash and good bands to play with. Witchrist, Crawler, Meth Drinker, Electric Mayhem, Numbskull, Stone Angels, Boltcutter, Creeping and Somme to name a few... 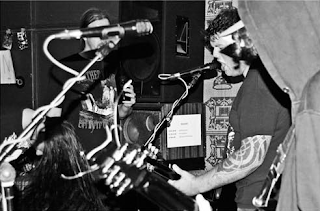 Okay, so with thoughts of home in mind, let’s go back to the origins of the band. How did the band start and how did you guys come around to playing this style of heavy music?

Half the band had been playing in death metal bands for a good number of years so the idea of starting a band with the tempo slowed right down and having all this extra space to work with was a revelation creatively. It became an exercise in ruthlessly trimming the fat and trying to do the maximum amount of work with the least number of notes. This approach lent itself well to getting a more 'sonic' thing happening with the string attack. When we started getting the results we were after the songwriting process seemed to happen pretty naturally and quickly, and most importantly left open a lot of possibilities we could go down in the future.

We still worship at the alter of Morbid Angel as well as many other heavy bands, but we figured if we could get a similar atmosphere but use radically different methods and influences to get there we could tap into some new territory. Loud amps, psychedelics and Yog Sothoth would sum it all up.

‘Shallow Grave’ has been getting some cherry reviews from the best sites about heavy music around like Sludgelord, Temple of Perdition, Six Noises and The Obelisk.  The band is getting its name out there.  What’s next?  How do you plan on following up?

We are actually in the middle of making an EP at the moment, with the main tracking having been completed in the last few days. I say EP, in reality it will be 40+ minutes long, but it feels structurally more like an EP release for us. Plus it gives us an excuse to try out some things we've been wanting to do for a while. We're trying to entrench some of the more atmospheric parts of the first record a bit deeper into the songs. It's not going to be pretty. So the next step is finishing the follow-up and trying to secure a vinyl release for that. Then it’s onto building some setlists for a batch of shows we have in July.

Thanks for taking the time to chat with me.  Any final words or announcements you’d like to make?

Thanks for the interview, Lucas.
666 - Get fucked up in Hell.

Here's those links I was promising earlier:

Some reviews to chew on:
Six Noises
The Obelisk
Temple of Perdition
The Sludgelord