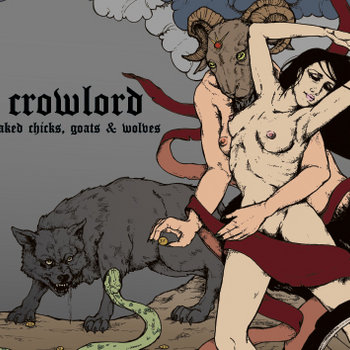 Crows can be taught to speak a small vocabulary in a parrot-like fashion, if you raise them from an early enough age and train them to do so.  They don't have the most beautiful or musical voices in the world, but if you could imagine just one crow in all the millions across the world growing up in captivity in Memphis, Tennessee and somehow starting a band, then I've got to think Crowlord would be it.  Apparently, you can also teach crows to attack people.  Could you imagine a small army of attack crows defending your home against unwanted visitors all shouting, "f-k awf!  f-k awf!" all at the same time?

Sometime in February I was treated to the Crowlord demo on bandcamp.  I don't remember how I latched onto this one, but I suspect a certain Sludgelord might have had something to do with it.  Anyway, it was on my list of stuff to review for far too long and before I'd even begun my review of the demo it was pulled down from the site.  The reason?  You're looking at it.  It was sent down the memory hole to make way for the band's triumphant debut, 'Naked Chicks, Goats & Wolves'.  I'm glad I was able to grab the demo while I could, though.  It has now become a lost relic of the internet age.  One more note before we jump in here.  If you'll look closely at the album cover the clawed and goat-headed (and goat-legged) figure also has tits.  Just thought I'd point that out.  It's very Baphometan (to invent a word).

Crowlord plays a doomy brand of sludge wrapped in an incredibly dark sheath.  Brian Anderson, Crowlord's vocalist can actually sound like a crow, cawing doom down from a building ledge or power line, and he does so without delving into outright mimicry.  Meanwhile, the band behind him sound like an overcast sky with dark clouds slamming together on gusty jets.  In other words, these are ominous tones provided by Jeremy Jackson and John Burton, Crowlord's double bass attack.  They don't bother with the whole guitar thing, you know how it is, that's been done to death!

The five songs from the demo have been re-recorded here with new drummer Rob Morrison and have been provided with better sound quality.  In all, four songs have been added to the demo's repertoire, "Good Lord, Look Away", "Retarded Wizard", "Draugr" and "Gestate", all of which rely heavily on Morrison's steadily pulsing and busily punctuated backbone and a bit less on the darkly suggestive atmosphere provided by the bass combo.  But the five older songs, they are the sticky substance that holds 'Naked Chicks, Goats & Wolves' together.

So why am I so into Crowlord when they have this abrasive vocalist and lean pretty heavily towards the hardcore side of things, when normally those aren't my things?  It's got to be a mixture of a couple elements here.  First thing is the band's double bass attack, and their wise use of it.  It's no gimmick that the band opts for this set-up and the result is that a guitar isn't missed.  I prefer a band at their darkest, droniest and doomiest anyway and there's plenty of that here.  The second reason is, in a word: dynamism.  Because Crowlord doesn't get stuck on one particular mood or sound, the hectic-paced sludge encrusted beatdowns and the slow, ominous doom balance each other perfectly from song to song.  You don't get lost in one scene or another and neither side of the band overstays its welcome.  Sequencing counts!

I'd be surprised if Crowlord weren't signed to a major label sooner or later.  They are already building a fairly sizable following for such a new and unsigned band.  I could easily see these guys getting snatched up by Relapse or Southern Lord or somebody and the busier, sludgier, crustier side of the band emphasized to the nth degree but all that stuff is based on nothing at all aside from an incurable case of Paranoid Hitsophrenia.  Of course Crowlord could just caw "f-k awf" at the prospect of emphasizing any one element of their sound to please label people, which I'm sure is exactly what they'd do.  The beauty of Crowlord is in the balance of elements.  For now anyway, just enjoy the Naked Chicks, the incredibly deep tones of doom, the Goats, the cawing vocals and the Wolves.

Highlights include: "Son of Crow" and "In the Nightmares of Serpents"