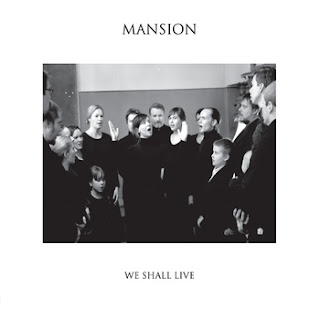 There are plenty of good bands out there that play occult rock, Finland's Mansion plays 'cult rock'.  They are a six piece band, but for all that is known about them there could be a hundred of them, not all of them musicians, huddled together in a mansion somewhere in the frost-bitten north.  Only christian names are given, and just a few photos have emerged of the band while playing live.  They exist as a muted and esoteric secret, only paying homage to the world outside when they speak through their instruments.  'We Shall Live' is their first attempt to communicate their cryptic message to the masses.  Mansion's music is devotional music, non-traditional gospel that revives a dead religion for a new day and age.

When they do speak, a clean sound emerges.  Usually you associate doom with a scraggly aesthetic, ragged dark tones and lazy tempos.  Mansion's riffs are streamlined, satisfyingly doomy with gilded edges.  Vocals have an almost glossolalic tinge at times before settling into a more traditional rock and metal sound, in order to spread the message to the masses.

For the history buffs, there is reason to Mansion's madness.  The name of the band is taken from the surname of Alma Kartano who led a religious cult in Finland from the 1920s through to the 1950s, which was collectively known as Kartanoism.  Kartano is the Finnish word for Mansion and at its peak the Kartano cult could count about around a hundred devotees to its numbers.  The cult was notable for using children as preachers while apocalyptic feverishness mired the movement in a dour and lengthy period of waiting for the second coming.

According to their short bio, Mansion were "brought together to create strong music reflecting the life of the cult's followers".  Staying true to this vision, lead vocals are sung by a woman, also calling herself Alma, who takes on the spiritual essence of the original Alma.  Thick atmospheres of devotion greet the listener on first play with a lone organ and quiet vocals heralding opening track "Mother's Burden".  Right off the bat, this establishes a worshipful tone to the church of Mansion.  When you see the promo photos of the band surrounded by devotees and children with all present dressed in black sexless clothing, it's easy to get a 'cultish' vibe from this band.  As a matter of fact, I didn't realize Mansion's cult-like imagery was based on anything at all aside from an earnest drive to express themselves before I read their bio and still I was ready to have Mansion be cult-leaders for this review.  "Mother's Burden" is a true epic, rotating between killer riffs with driving tempos and that devotional sound that the band will soon become famous for, the band has a unique vision and they are able to impart that to listeners, even to those that don't know the actual history behind the band and their partial inspiration.

The religious overtones carry over into the title track and spill out across the second side of the EP.  Another trick of the trade that Mansion brings to the table are loose and stray bits of ambience between, in and around their songs which create an upright and attentive mental state before slamming in to listeners with those powerful riffs again.  Often, the band builds up a strong head of steam with their powerful riffs and solid tempos, before pulling the rug on listeners by cutting the speed of their songs by half and allowing the solid edges of the music to blur like solidified smoke breaking up.  The technique is not abrupt, is actually quite subtle and very nearly creates a true state of rapture or musical bliss (see "Sorrowless" for a prime example of this).

Of the four songs on this EP, "Slumber Sermon" is clearly the slowest of the bunch and brings those religious, monastic feelings to a head in a cataplectic dirge.  This is a very accomplished debut EP.  Based on the quality of riffs and the number of subtle musical techniques spread throughout, it plays out as though a lot of thought has been put into the music and makes this EP a whole and complete work.  I will definitely look forward to a full-length album from this band.  This is an incredibly solid introduction to a band with a unique vision.  The EP is available for pre-order on the band's bandcamp page (see link at bottom of page) and there are a number of preview tracks available for streaming there, check them out or repent!

Highlights include: "Mother's Burden" and "Sorrowless"