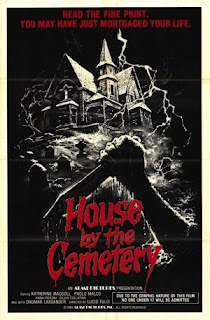 This is the fourth Lucio Fulci film I’ve seen after Zombi 2, The Beyond and City of the Living Dead and I’m becoming more and more familiar with the ‘language’ of Fulci, his pacing and his tendencies.

A quick plot set-up (no spoilers): A professor moves his family of three from New York City to a small New England town to continue the research of a recently deceased colleague.

An obvious influence on this film is Stephen King’s The Shining, specifically in the form of a ghost who speaks telepathically with the little boy in the film.  Themes of relocation and alienation are present as well.  When the family first arrives in the small New England town, the ghost is actually standing across the street and down a ways talking to the boy just as King had his ghost stand waving on the horizon, calling to Danny in a distant voice.  It’s fair play because Stanley Kubrick decided to leave things a bit more subtle in his film adaptation of the book and as the old adage goes “it’s okay to steal from outside the medium you are working in”.  It’s assumed that not every film goer reads novels and had film audiences only just witnessed the same scene in Kubrick’s take on the novel of a year and a half earlier, it wouldn’t have worked.  Well it works here and I recognized it instantly.  See, one other tool in the storyteller’s bag of tricks is to reference other recognizable works to put a spell on the reader / viewer / audience.  As the mind recalls the more well-known story, it also brings back the feelings of the original.  Done well, this technique adds layers to a story and gains sympathy from an audience (see my review of Uncle Acid’s recent abum ‘Mind Control’ wherein this same technique is used to admirable effect).  Done poorly however, and this technique is simply wretched thievery (see another 'flower-themed' band who shall remain nameless).

Fulci was a master of gore.  Now, gore isn’t necessarily the greatest thing in the world because directors often take a hamfisted approach to it.  Fulci’s gore was over the top as it should be and he’d keep the camera’s eye trained on it for an uncomfortably long period of time.  One scene in particular (and there’s a minor SPOILER here) is when they finally get into the cellar and Norman Boyle (Paolo Malco)’s hand is attacked by a bat.  Norman stabs it with a pair of sharp scissors but the bat doesn’t die.  Not initially anyway.  Fulci kept the voltage turned up on viewers until the smoke started pouring from the skin.  No way, you were going to get off easy in a Fulci movie.  In a Fulci movie?  Forget it!  The man made you squirm.  If there was a death in the story, he wasn’t going to simply cut away to a funeral service.  Fulci wasn’t a reporter, he was a revealer.  If there was a death in the story he was going to show it to you.  It was Akira Kurosawa who said that it’s the job of the artist to never look away.  Fulci never looked away and he was fearless in sharing what he saw.  In a way, he challenged audiences to be the artist, or at least to have an artist’s mind and see what the artist sees, to understand what it was that they saw.  And what they saw was horrorific. 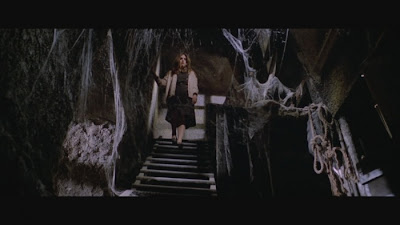 Fulci was also a master of atmosphere.  He could do more with cobwebs and a flashlight than any ten CGI artists put together, hell, any hundred.  Atmosphere is all-important to the horror genre.  While the Doom Metal band grapples with finding just the right and lowest tonal frequencies possible, the horror writer struggles with atmospheric embellishment.  Sure, horror fans, we like an interesting plot and we’ll sit through and hour and a half of slow pacing just to get to the small handful of lasting and horrific images, those things are important, but what we’re really there to experience is the atmosphere of horror.  Aside from those few ‘setpieces’ what atmosphere can do is make an average movie stand out, it can make a boring movie at least visually interesting and it can make a bad movie into something memorable.  Fulci manipulated light and shadow like an ethereal puppeteer.  It’s a conspicuously subtle technique from a man who is known primarily for the gore he wrenched from his characters.  Little visual things like tombstones among dead trees and dusty old books swimming with occult secrets and his use of cellars.  There’s nothing like a good cellar in a horror film.  From Poe’s The Black Cat to Night of the Living Dead ((1968) & (1990)) it’s been a genre trope almost since the beginning.  Fulci extracts full value from his in this movie: loud, creaking stairs; mesmeric eyes peering from shadow (another Fulci trademark but never so memorable as here) with cobwebs and strange, The House by the Cemetery has some of the best basement / cellar scenes in the business. 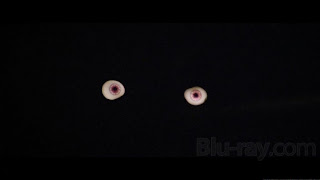 All that said, the man had his filmmaking flaws and there’s a flip side to all the excellent work Fulci did in his films, this one is no different.  As he was wont to do to exploit the full nauseating potential of his wonderful gore, Fulci often attempted the same technique of engaging in a staring contest with viewers during all major scenes tense or intense.  In other words, he hung around too long.  The problem was perhaps one of feel or one of editing, but the fact is he shot his wad too early too often and just let it sit there creating more awkward moments than ones fraught with exciting tension.  Instead of a slow build up, it was often a long, drawn out conclusion that viewers had to wrestle with and the climactic scene which begins with the young, annoyingly voiced Bob is locked in the cellar creates many a shift in seat, a wristwatch checked, a doodad played with because the attention of the viewer really does flounder.  Both tension and momentum are lost in this scene despite the excellent job that had been done in setting this scene up.

Fulci has Ann, the babysitter who is originally introduced to viewers as a red herring, meet a grisly demise in a similar locked cellar scenario.  Images of dismembered children are there in the lead up to this scene.  Of course, it’s probably best that Fulci didn’t exploit the scene’s full potential with such a set-up because he would have been relentless about it, showing the dismemberment in explicit detail, crossing a line into truly poor taste.  There are certain lines that shouldn’t be crossed and an on-screen child murder is one of the thickest, boldest lines one can imagine.  The dismembered corpses of children colors pretty close to outside the borders as is and was one of the elements which gave this film its infamous ‘video nasty’ rating in the UK.  Anyway, in spite of the careful build-up the scene just falls flat.  How long can it possibly take for Dr. Freudstein to walk up a dozen steps anyway?

Of the four Fulci films I’ve viddied, this one is right up there among his best work, though, and once the climactic scene gets moving it leads to some of the most memorable moments in the film.  Although I would have liked to have seen the cemetery aspect of the film’s title emphasized a lot more one can’t fault the man’s overall storytelling capabilities.  Pacing and execution are a little off at times, but that’s as is expected.  At the end, he delivers on the horror director’s promise of a few key unforgettable images (who can forget the knife twisting into Dr. Freudstein churning out a nearly endless ream of maggots?) while padding the memory with a bed of imagery and moments.  But, can anyone tell me just what the hell happens at the very end? 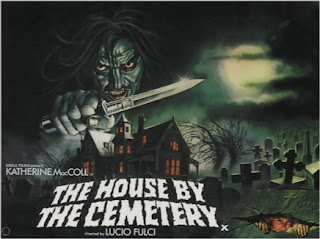 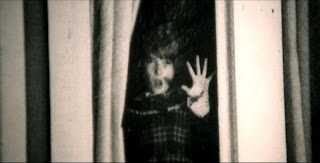 CREEPIER THAN CHUCKY
One of the most disturbing aspects of the film though, has nothing to do with storytelling or technique and everything to do with performance.  The voice of the young boy, Bob Norman (Giovanni Frezzi) is just not right.  This is an Italian movie with Italian direction, and Italian production, but Italian actors speaking English.  The film is overdubbed which adds a soupcon of just right B-grade silliness.  The actor speaking for Bob, the child, is not a child, but a woman trying poorly and failing miserably to sound convincingly like a little boy.  For the first half of the film at the very least it’s a major distraction and I could see it being a deal breaker for some.  It really doesn’t help matters that Frezzi has a naturally creepy quality that is brought out by the character’s indifference and obliviousness towards the horror around him. 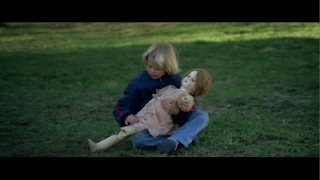 As mentioned above Bob befriends a ghost, a little girl who may be a couple years older than him.  She gives him a beat-up and broken limbed doll for him to play with.  Dolls, specifically older dolls are one of the creepiest, ghastliest inventions in the history of mankind.  I haven’t seen the movie Chucky since I was a child, not since around the time it came out and the reason is, dolls are fucking gross, period.  That shit is traumatizing to a young person.  Also remember that episode from Seinfeld where Jerry and Kramer switch apartments after the Kenny Rogers’ Roaster’s sign is turned on ends with a scene where the silhouette of a doll called Mr. Marbles is seen scuttling around the apartment while Jerry tries to sleep.  All of that pales in comparison to the creepiness of this kid and his unnatural voice playing with a girl’s doll.  It pales and withers!

As always, this being a music blog, we've got to talk about the Walter Rizzati film score.  Beautiful and haunting, Rizzati broadcasts waves of paranoia through moviegoers by his use of grating static-y drone which is turned up to 11 in key scenes, then has the rug pulled out from underneath it by a hard cut, just dangling the audience on a frayed string.  It's an effective technique when used at the right moment, but I'm afraid it's overdone here and goes from being a potential legendary masterpiece of Italian horror soundtrack to something that becomes really distracting and ultimately annoying.  Here's a lesson kids, know when to hold 'em and know when to fold 'em. Just because something works one time doesn't mean you've got to go back to it every time.  Now, I don't know how much input Rizzati had in these decisions but I suspect they were Fulci decisions, a man who seems to have lived by the credo, "if something's worth doing, then it's worth overdoing".

Email ThisBlogThis!Share to TwitterShare to FacebookShare to Pinterest
Labels: Horror, Lucio Fulci, Movie Reviews, Others, The House by the Cemetery