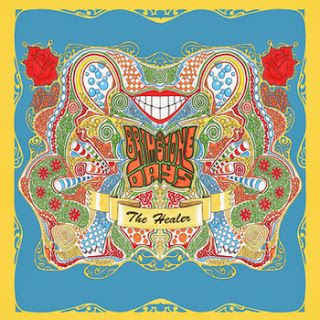 Malmö, Sweden's The Brimstone Days are back with their second full-length album in 14 months.  I reviewed their last album, 'On a Monday Too Early To Tell' only early this year and their formula of happy-go-lucky, riff-centric rock took me by surprise.  They are one of the most unique bands out there in their approach to things, and while I may not share their 'everything is rosy' philosophy on a personal level, I can certainly appreciate their incredibly consistent level of hard rocking output.  The same goes for their presentation, though I may not like 'choreography' as a general thing, I definitely marvel at the band's single camera, single take music videos.  'The Healer' offers up 11 tracks of pure fun and blue eyed soul.  If there is a band today who wear their hearts on their sleeves any more vulnerably than this hard rocking trio, I haven't heard them.

As far as that consistency level goes, one may make the argument that 14 months isn't long enough time in between albums.  Not enough 'life' has happened in the meantime and there isn't enough growth as an individual to put on showcase as an artist.  That may or may not be a valid argument and if it is, it would apply here.  Then again, The Brimstone Days was never the kind of band that was going to be steeped in contemplation and self-reflection.  As a unit, they have been put on this earth to do one thing and one thing only:  to have a good time.  That's what comes through in the music most of all.

The album opens with "Black and Blue" which continues the band's observation of hard rock Holy Relics, as they had on their last album, paying tribute to Hendrix, Lynott and Clapton without directly ripping off any riffs.  Southern swamp funk washes in to the appropriately titled "We Come In Peace".  It's a pretty accurate statement of the band's overall party rock approach.  They mean no harm.  After all, what could be more peaceful than a raging housewrecker?

The Brimstone Days also have their old school soul moments, "Clap Your Hands" and "I Won't Let You Go", capturing the genuine funk flavor of Sam & Dave or The Staple Singers.  Blue eyed soul is not the kind of thing you hear a lot of nowadays, The Brimstone Days pull it off with genuine soul and fire.  But,  the band finds their most positive moment on "Miss Understood".  The line "They call me crazy I say misunderstood" really resonates for a lifelong weirdo like myself.  The song is like a clap on the shoulder and a supportive wink.  No, The Brimstone Days aren't going to engage in a deep, meaningful coffee shop conversation about "your illness", they are just going to stand there grinning and say, "yeah man, it's okay, go nuts if you want, we won't judge you".  The only difficult thing in an atmosphere like that is for the crazy guy not to take things too far.

'The Healer' picks up where 'On a Monday Too Early To Tell' left off, but if there were a noticable difference between the two albums, 'The Healer' finds the band in a slightly more thoughtful mood.  Quieter songs find a toehold on this album and certainly don't dominate, but their presence is felt.  For every quiet song though, there are two or three of the exuberant kind.  Of course, there are quiet moments within the exuberant songs ... But you know what, 'The Healer' pretty much sees the band continuing along a linear trajectory.  A trajectory which points towards wherever the nearest party is.

And the nearest party happens in Sweden on November 6 when 'The Healer' will be released on an unsuspecting public pushing desperately through their humdrum lives.  The Brimstone Days will brighten up the winter months.  As for the rest of us around the world, we can expect a release date of December 8.  The album will be released on CD and black and yellow vinyl through Transubstans Records.  Also, keep your eyes peeled for a new video, I'm sure it will be crazy, but we won't judge them for it.

Highlights include: "Nightmare Is Here" and "Miss Understood".