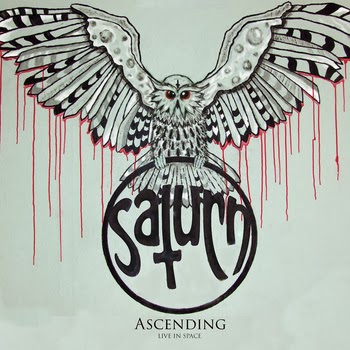 DEMON EYE – “Shades of Black”
Debuting at #12 this week is Demon Eye's "Shades of Black", a song that was originally released on the Raleigh, NC quartet's debut six-song E.P. nearly a year ago.  Why is a song that's nearly a year old debuting at the #12 spot?  Because it's being released on the band's full-length album 'Leave the Light' this Friday.  The album features all six E.P. tracks and a clutch of all-new tunes.  I'm glad the band and their label, Soulseller Records went this way with it because it gives me a chance to re-acquaint myself with this tune, a song that was originally somewhat overshadowed by songs like "Hecate", "Silent One" and "Fires of Abalam" (yup, they're all on the new LP).

I wrote a fairly extensive review of 'Leave the Light' for The Sludgelord blog which you can read right here, so I won't rehash all of that wonderful stuff I said about it only to say that I love it and I bet you will too, even if, like me, you already have the original E.P. [see the Paranoid review right here]  Again, five new songs make it well worth picking up with "Adversary" and "Secret Sect" being the strongest of the bunch.

But "Shades of Black" has also been a true standout for me.  Matter of fact, it's been a go-to song to sing and whistle at work over the past few weeks.  It's one of the band's more iconic tracks, featuring the band's trademark guitar sound and curly riffs with a strong whiff of Deep Purple on top.  Don't be surprised if this song goes pretty far up this chart in the coming weeks.  You can pre-order the album by emailing the address found at this link and inquiring about shipping rates.