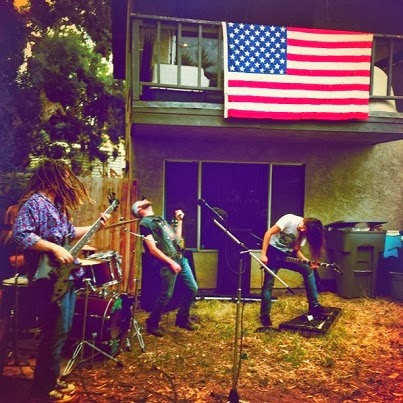 STONE DAGGER – ‘The Siege of Jerusalem’
Written By Soggy Bob

This is some powerful metal from the one and only Brendan Radigan (Magic Circle/Battle Ruins/Mind Eraser...). This is all his doing. He wrote it it. All of it and it's incredible. With the help of studio musicians (Chris Corry and Justin DeTore of Magic Circle) he's put out an amazing two track demo called The Siege of Jerusalem. If you're a fan of Cirith Ungol, Brocas Helm and Manilla Road (like moi) this is right up your alley.

Brendan posted a tune on his FB page and it seemed like it shook the earth. The response from everyone was pretty fantastic. The two tunes are The Siege of Jerusalem and Black Clad Rider. The first track, Siege of Jerusalem starts off with a slow riff before Brendan kicks in with his painfully heartfelt lyric "Father I Pray...". So fucking glorious! The song picks up with some tasty leads and Brendan belting out some catchy hooks. I swear Ive listened to this one song nonstop for at least 2 days. Definitely my favorite song of 2013. Black Clad Rider starts a little quicker with some killer riffs and Radigan singing some very up beat lines leading you into the ultra catchy chorus. After a lead by Chris Corry and more great riffs Brendan is back with that amazing chorus to close the song out. This is one hell of a release. Two amazing tunes by an incredibly talented musician.

According to the Electric Assault Bandcamp page this will be released as a 7" on Feb 18th. Don't be a loser. Bookmark this link and buy it asap. It will sell out in minutes. http://electricassaultrecords.com/
Posted by LK Ultra at 17:44