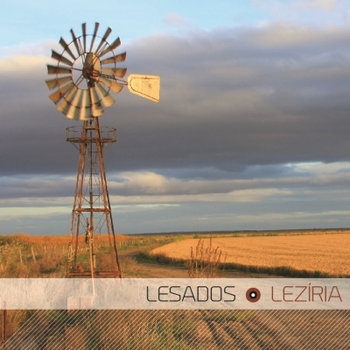 Lesados play stoner rock which has grown from the cracks of a punk rock foundation.  They have the same kind of driving, hypnotic, almost robotic riffs and rhythms that were a main feature of Josh Homme's early years.  When a guitarist just riffs away forever like that it creates a juggernaut of momentum.  This is true of track one "Porque?", a hypnotic drill of head down riff mongering and brick wall smashing.  As the song and album titles suggest, Lesados' lyrics are all in Portuguese.

On "Neblina", the band get into some slow riff doom territory, while maintaining a crusty punk edge which is always apparent in the vocals, upping the tempo for the chorus.  While older Black Pyramid and Devil have a doom punk thing going, Lesados have a different feel, capturing more of the original spirit of The Obsessed in its combination of styles.  "Olival" keeps the doom rolling with grooves a-plenty, once again scratching out simplistic, heavy and ultimately satisfying riffs, which seems to be a dying art.

In many ways, 'Leziria' features a misleading album cover.  Where one might expect to hear some slow burning dusty crop blues inflected rock, Lesados keep a steady pace.  So steady in fact that the bulk of the songs are a nearly uniform length with the exception of closing track, "Zona", an 11 minute romp which also features a hidden riff-o-rama track.  'Leziria' is fast-paced, riff-mad, heavy rock n roll.  As the album progresses, the feel of the album cover becomes a little more apparent on tracks like "Cadáveres" and "Zona".

So what you're getting here is some fast paced, punk-inflected stoner rock with rural moments and insistent riffs.  The doomier moments fall within the bracket of what Corrosion of Conformity is doing these days, which is a good band to keep in mind when approaching Lesados, especially on "Neblina".  Best part of all, you can download this gem for half a friggin' euro on the band's bandcamp page, now.

Highlights include: "Neblina" and "Porque?"

Reminds me of: Corrosion of Conformity, The Obsessed