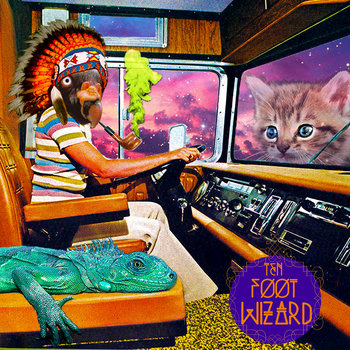 BIO:
"Ten Foot Wizard was formed as a side-project by members of Manchester metal band Bisonhammer in 2009. Since then the band have played just a handful of gigs each year but have garnered a reputation for putting on an incendiary live show, recently supporting Karma To Burn and Witch Mountain.


The band play their own brand of heavy blues rock that owes as much to classic bands such as Black Sabbath and Led Zeppelin as to more modern bands such as Clutch, Queens of the Stone age and Fu Manchu.

With the release of the debut album 'Return to the Infinite' on May 2nd 2013, Ten Foot Wizard hope to be playing live a lot more often and carve out a niche for their bluesy beard rock."

Be sure to listen on the player below, click the link and follow through to Ten Foot Wizard's bandcamp page with your beard lovin' support and while yer at it, check them out on facebook (link below).

Also, for our Mancunian friends, be sure to clear your agendas for Ten Foot Wizard's show on FRIDAY, JUNE 7 @ THE DUCIE BRIDGE (152 Corporation St.) in MANCHESTER, ENGLAND. Friday night show, no holds barred!  Great line-up for this show with Space Witch and Bastard of the Skies, too.  Here's a link to the event page on facebook, be sure to check it out and get ready to have your beards rocked right off your northern faces!
Posted by LK Ultra at 08:03