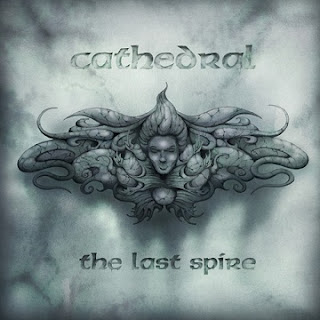 Before we even begin, I'm going to pre-emptively let the reader in on a little secret: I do not have as exhaustive a knowledge and/or deep and mystic an understanding of Cathedral's back catalogue as others do.  I have their first album 'Forest of Equilibrium' on CD with the 'Soul Sacrifice' EP and a bonus DVD which was a major score for something like 10 bucks down at ye ole Scrape Records.  Anyway, since then I've downloaded and listened to 'The Ethereal Mirror', 'The Carnival Bizarre' and Paul Chain's brilliant 'Alkahest' album, on which Lee Dorrian sings vocals.  What you won't be getting here with this review is an expert's context, where this album fits in to the band's recorded legacy, nor any of that nonsense.  So, what with this being a final album, if Cathedral makes reference either musically or lyrically to their past works on this album, it will fly right over my head.  This album will be judged solely on its own merits, as it should be.  Right, so let's begin then ...

Oh, before we begin the beginning ... this should come as no real surprise but Cathedral and their album 'Forest of Equilibrium' were one of the first doom metal bands and albums that I discovered.  In fact I was so new to it, I didn't even realize that it was considered doom metal.  I wasn't even looking for doom, per se, when I found them.  I found them on Decibel magazine's Hall of Fame records thing, I listened to a track on youtube and went down to Scrape and picked it up, and though it took a while for the record to grow on me, I've been a fan ever since.

Okay, time for some truth now.  What I'm doing is avoiding the issue of actually getting down to reviewing this thing.  I don't want to do it really.  This being their acknowledged swansong, there's too much finality to it all, it's so hard to let go.  It's a fact that looms over the record thematically as well.  The ambient, crow cawing intro "Entrance To Hell" is a bell-ringing call to "Bring out yer dead!" and leads into the 11 and a half minute "Pallbearer" (there's that death theme).  Most noticeable of all are some of the lyrics which are well worth looking into:  "Living in the shadow / of the damned Cathedral" jumps out at you as do the lyrics of the lead single "Tower of Silence".  If one wanted to read into them, the lyrics would certainly appear to tell the story of a conflicted Lee Dorrian who on the one hand is happy to shuck the carapace of the band he has made an institution while at the same time suffering some doubt and anxiety about doing so.

One gets the feeling however, that Dorrian and co. have moved on creatively from most of what Cathedral represents.  One of the band's most signature techniques, that being Dorrian's sing-songy vocal style so familiar and prominent on the earlier albums, makes but brief appearances on "Pallbearer" and "Infestation of Grey Death" and is largely muzzled.  But the riffs are there, the vibe is there for one last blaze and the effort is genuine.  At the end of the day, it's a good job that they didn't just phone the effort in, because knowing this to be the last album, the feeling is that fans might have been happy with a 40 minute album but they went full bore and gave the listener a full 56 minute farewell.

The morbidity expressed on this record begins to play out like a ritual by the midway point of "An Observation".  It plays out like a ritual in the sense that a funeral is a ritual that is meant to ease the suffering of survivors by "letting the deceased depart".  That's what this album is like.  That anxiety and doubt expressed in some of the lyrics aren't the band's doubt and anxiety.  It's yours.  It's the listener's.  Cathedral do a masterful job here of exhaling all that is left of the potent smoke of inspiration while easing long-time fans out of their high.  Most bands just break-up and are either never heard from again or re-form 20 years later and the vibe is never the same.  Cathedral go more than half the distance for their fans and for that alone they should be lauded endlessly.  This album allows the band to go out on their own terms.  How many bands can say that?

Some twenty plus years ago Cathedral created a monolith.  Without a doubt Cathedral is one of the most influential bands in the Doom Metal genre (just look at and listen to Electric Wizard's first album, then see what they went on to do) and their legacy was secure long before work even began on this album.  Will 'The Last Spire' add to this legacy and win the band legions of new fans?  It hardly matters.  As an exclamation point on a long and varied career it's no slam dunk perhaps, but it allows the venerated band to go out with dignity and is well worth a listen.  With such new wave bands as Witchsorrow, Moss and Alunah patrolling the British shores, the UK stoner / doom / sludge scene is in excellent hands, and it's all thanks to this band, who now turn it over to them to inspire the next generation of doomed and sludgy stoners.

Highlights include: "Infestation of Grey Death" and "Tower of Silence"

Reminds me of: Alunah, Electric Wizard, Moss, Witchsorrow and every other band in the doom subgenre that has come since them