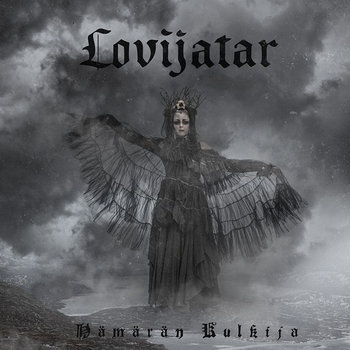 Don't let this Finnish folk outfit pass you by.  Tired of everything sounding the same?  Well, Lovijatar is like a 40 ounce cup of coffee taken intravenously!

"Inspiration for lyrics made by Rautio and Vaittinen comes from Kalevala and other old Finnish folk poetry. Pieces of melodies have been taken from Carelian and Finnish folk requiems. These requiems have been recorded in the beginning of the 1900´s when the last traditional folk singers were alive.

"“We have picked themes from these dirges that feel natural and transformed those in to modern rock expression. Our goal is not to recreate some old folk music but to create totally new music that has echoes from the past centuries. We can not fully understand how people have felt and lived in the old forest societies but we are children of our time and we want to sound like that”, Says Rautio.

"Carelian keens or requiems (itkuvirsi) were performed in the old rituals that were connected to passing and transferring from one state of life to other one. For example a subject for a dirge could be a death of a close one or destiny of immigrant folks. Women with covered faces performed these songs at ceremonies. These songs have deep understanding towards life and what happens in a human soul. These song empowered members of Lovijatar to find a musical expression.

"“I feel that we must do music in Finnish because it is our mother language and if really want to evoke emotion we can not do it in another languages. We have lost lots of old Finnish culture and it is best preserved in folk poetry. That’s the only place where we can really go and find something ancient from our heritage. “, Rautio continues.

"Other members of Lovijatar are Mikko Neuvonen (Elephant Bell, Drums), Petrus Rapo (Boner, Guitar) and Riku Hakala (Tytär, Bass.) ‘Hämärän Kulkija’ is bands first release that is a combination of heavy riffs, melodic expression and hard handed playing. Release is bands first one and it is released by themselves. It can be heard and bought from:"