A look at what came in the mail this week, featuring links, product descriptions and mini-reviews, featuring ...

The Alan Bown started out in the mid-sixties from the ashes of the John Barry Seven (yes, THAT John Barry) as a mod/soul band called The Alan Bown Set who released a terrific single called "Emergency 999" in 1966.  But the winds of change were blowing and like most British bands of the time gave themselves body and soul over the psychedelic mores of the time and re-emerged nearly overnight as The Alan Bown!, dropping the 'Set' from their moniker.  At the time 'Outward Bown' was released the band had found a niche as a wimpy toytown pop outfit with singles like "We Can Help You" [written by the original, British Nirvana], "Toyland" and "Story Book" leading the charge for the album's release.  All great songs, but offering no clue as the true power this band had on offer.  A charged-up cover of "All Along The Watchtower" being a prime example of the band at their most powerful.  Somewhat harder edged songs like "Magic Handkerchief" and "My Girl The Month of May" also evinced a further sea change for the band towards a harder edged, proggy sound that would find full blossom on "Movie Star Baby" [written by then current band member Jess Roden], a terrific song that was sadly only recorded as a BBC Session and never officially released.  Interestingly "Penny For Your Thoughts" synthesized the two sides of the band with a fuzz heavy, West Coast / Hendrix raver of a riff during the verse and a wimpy pop chorus that sounds almost George Michael-ish.  Terrible as that sounds, the chorus lasts only two bars and the overall song is really quite excellent.

What this CD re-issue lacks in liner notes (limited to a single paragraph on the back cover), it more than makes up for with its 14 bonus tracks, two more than the original album itself!  I got this CD from Record Heaven and it appears that I grabbed the last copy.  As of right now they're selling the double CD version which includes a mono and stereo mix but not nearly as many extra goodies, including the BBC Sessions.  I'm sure it will be restocked at some point, so keep an eye out on Record Heaven if you're interested because there are many versions of this album and they are all overpriced on Amazon.

By now, everyone's heard Arkham Witch's stellar 'Legions of the Deep' album, but how many have heard 'On Crom's Mountain'?  I'm not sure but I know that when I discovered this band on youtube many months ago this album seemed impossible to get a hold of.  Enter Metal on Metal records and their release of the Keighley quartet's debut on tape, licensed through Mexico's Raw Metal label.  Much like their latest album, 'On Crom's Mountain' is ten tracks of raw guitar-driven, old school metal, the way you remember it and the way you like it.  The cover was redesigned by Jowita Kaminska-Peruzzi of Metal on Metal and connects to the 'Legions of the Deep' artwork and Arkham Witch's next release (not yet released). This item is limited to only 66 copies and costs a mere 6 euros but is also available as a digital download on Arkham Witch's bandcamp.

Here's the original cover artwork, nice but not nearly as nice as Jowita's.


Highlights include: "Battering Ram" and "Viking Pirates of Doom". 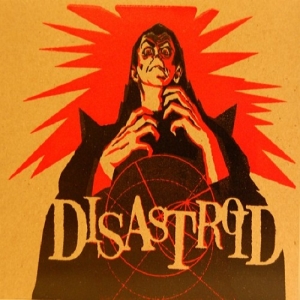 Disastroid are a terrific trio out of San Francisco that play an exciting style of stoner rock, reminiscent of a more accurate vision of Queens of the Stone Age's 'Robot Rock'.  This album starts out strong and improves with every listen, each song better than the last and keeps on giving.  I reckon this album came out about half a year ago and I slept on it first time around, only because I never got the chance to hear it for one reason or another, but after reading about them on a blog or two I always kept them on my back-burner list.  It only took one listen to convince me that this was something I needed in my household.

Real basic setup on the physical package, a bare-bones gatefold cardboard sleeve with a photocopied insert small poster / liner notes.  All told, the package will run you 10 dollars on big cartel.  I also got a free Gorilla vs. Robot t-shirt with it.  Win.

Highlights include: "Money & Guilt" and "Fallout". 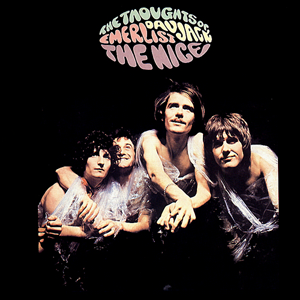 This was an album that had been near the top of my to get list for a long time, but I held off because I thought I could find it out there, in the real world.  I was able to find each of the Nice's next three albums used or new in different stores but I could never get my hands on this classic, their debut.  The Nice of course was the band that propelled Keith Emerson to stardom with his manic, knife-wielding stage performances and keyboard wizardry.  The band was completed at this time by three other cats who were no slouches of their own: guitarist Davy O'list, drummer Bruce Davison and bassist Lee Jackson (combining their names formed the fictitious title character Emer-List Dav-Jack, who was also credited with group compositions).

For metal and stoner rock fans there's a couple breath-takingly good proto-metal songs on this album, such as opening track "Flower King of Flies", and especially the bonus track "Azrial (Angel of Death)".  For me, this CD was worth picking up for those two songs alone, but there are other great moments.  Already by this time Emerson had hit upon his trademark sound of bouncing rhythms (see bonus track "Diamond Hard Blue Apples of the Moon") that would later come to define and dominate the sound of not only The Nice but of ELP as well.

Though this album came out when Prog was in its absolute infancy, already the borders between what the new prog bands were doing and that of the psychedelic bands of the era was clearly delineated with this release.  The single "Rondo", "Bonnie K" and "Thoughts of Emerlist Davjack" are all keyboard driven proggy slices of pop and can all be found on the A side of the album.  The B side is experimental in both sound and structure and creates more of a challenging listen.  This CD version comes with 5 bonus tracks including some of the best songs, two already mentioned: "Azrial" and "Diamond Hard Blue Apples ..." as well as "America", which may have been their most popular song.

I got this CD from Amazon seller Rarewaves-CA, on the cheap too.

Highlights include: "Azrial (Angel of Death)" and "Flower King of Flies".