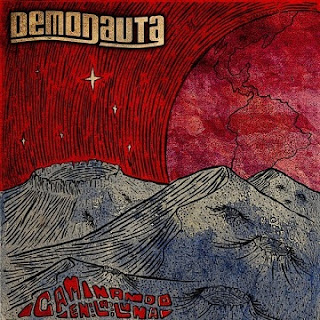 Arriving highly recommended by their countrymen, the superlative At Devil Dirt, Chilean trio Demonauta dropped their second EP in January and the world is a fuzzier place for their effort.  Three guys (David, Miguel Angel & Ale) dedicated to high powered fuzz rock.  Grooving canola oil slick bass lines, pounding drums and more guitar and vocal effects than one may shake a stick at define the DemonAuta sound, which is experimental while at the same time focused like a laser beam.

DemonAuta is classic fuzz / stoner rock, driving and melodic with warm breezes of intensity.  David Veliz's guitar tone is fat, full-bodied fuzz, bordering in places on pure static amplified and manipulated into musical notes and chords as on opener "Hacia el 6to Sol".  The sound is experimented on, refined, explored and re-imagined throughout the EP's entire span with generous dollops of phasing and reverb among other effects.  Even at five songs and 23 minutes there's simply no shortage of ideas, Veliz is never content to stay static, just to sound like actual static.  His vocals are all in Spanish and are sugary in tone but spit with venom.

That thrust toward the explorative is apparent in the songs themselves.  While they are all characterized by The Fuzz tone and pounding rhythms laid down by Alejandro Sanhueza, each song has its own distinct flavor.  Some of the best moments on this EP arrive when Miguel Quezada's bass fuzz carries the day, allowing Veliz to graze in more melodic pastures.  In those moments, Quezada becomes the hero holding the fort as Veliz takes flight as in "Al Viento Entender" and "Hotel".

Instrumental title track "Caminando en la Luna" translates into English as "Walking on the Moon" and that's the exact feeling of the song.  Somehow, the slightly more laidback vibe and the squealing guitars transport the listener to that great silver orb in the sky, exploring some of the same musical territory first staked out by Joe Meek on his classic 'I Hear a New World' album.

The EP is split as evenly as five songs can be between lyrical and instrumental numbers, sequenced as lyric-instrumental-lyric, etc.  The band almost sound more comfortable on the instrumental numbers, the songs are less controlled and more free and open, that much should be obvious, but there seems to be a higher comfort level when there's no lyrics 'holding them back' to freely explore their sonic worlds.  (Aside from the aforementioned title track, the other instrumental is "Camaleon")

This is a great band, each of the three guys steal the show in different parts and come together to make a large and distinctive sound.  It's the kind of group where the listener could imagine any one of them being the star attraction in any other outfit or going on to mega solo success but collectively they bring it all together perfectly.

Each song can be downloaded for free by clicking the download link on the player below.

Highlights include: "Camaleon" and "Hacia el 6to Sol"

Suggested listening activity for fellow non-stoners: Lovecraftian winged blobs flit by in the upper atmosphere of the Blue Area of the Moon.  It's then you realize you should have worn heavier boots.