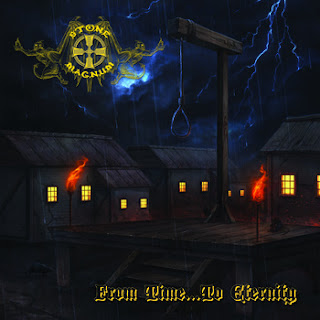 Stone Magnum is aptly named.  When you listen to 'From Time ... To Eternity' you may get the distinct impression that this music was forged in the molten and ancient heart of a volcano.  Stone age music that goes beyond sword and sorcery, updated for the digital age so that science has supplanted wizardry and the blade is substituted for the ultimate equalizer: the gun.  Not just a gun but a magnum, a Stone Magnum no less.  Yet still, the basic, familiar structure of man's life and it's related trials, remains hopelessly intact.  Stone Magnum is True Doom.

The remainder of the first four songs (what I reckon to be Side A of the record) is more of the same.  Epic traditional doom and just about as good as it gets in that regard.  Energetic but still moody, I dare say Stone Magnum's brand of doom is accessible to all metal fans, at least those of a certain bent and from a certain era.  Let's say, that this album has the potential to appeal to, for sure, any metal fan over the age of 30.  Anyway, as far as doom goes, solid epic vocals and music that moves, music that doesn't plod, but still finds time to lurk about in the shadows, is traditional doom alright, the best kind there is.  That's just what we get here.

The grammatically dubious "By An Omen I Went" sounds as though it might actually be a lost recording from the 1980's.  This song is for the most part a "prop-sword-wielding-muscular-guy-in-fur-lined-loin-cloth" kind of metal moment.  This is where the album takes a bit of a turn.  Not a bad turn, or a sharp turn where sunglasses left on the dashboard fly out the open passenger side window, but ... well, maybe a U-turn, back in time.  It begins to feel like voyeuristically peering into some tight blue jeans and black studded leather jacketed long-hair's bedroom window during the decade of big hair.  And though "By An Omen I Went" may use the 'passive voice' for its title, aggression abounds on Side B.  This is due largely to the efforts of the heart and soul, clenched fist vocal stylings of Nick Hernandez, whose talent is unleashed to its fullest extent on the latter half of the album.

The first time I heard the album, I thought I might have overblown this "switch" in styles, but I don't believe I have.  It's not as though the band decided to cut their record into a "traditional doom" side and an "old school metal" side.  But there is a moment on the album where your perception of what the band are doing and what they're all about changes.  There's also something of this in the theme of the album title, as we move forward through the album we go back in time and if the album is put on repeat we can see how the front and back of the album meet.  Who knows, maybe this is the hidden message behind the album, that maybe many artists no longer innovate but prefer to emulate what they enjoy, to emulate what hooked them into art in the first place, to the point where the new music (and specifically doom) that comes out is now somewhat indistinguishable from that which inspired it.  And when you think about it, what's the point of that?  Maybe it's all pointless, maybe it's all hopeless, maybe we all ought to just give up ...

This is music with an 'old soul' that cries out for action and lashes out with a vengeance.  Doom metal is the pop music of horror and Stone Magnum unleash the true doom on listeners.  They appear to do this with a minimum of fuss.  Sure, the 'effort' is there, but the effects, bells and whistles found in production and recording techniques and long improvisational instrumental passages of other bands are largely absent.  Stone Magnum weave an atmosphere all their own and do it with the tools available at hand, like stone age craftsmen, or in this instance, stone age gunmen firing rocks from a Stone Magnum like those from David's sling.  Who knows, maybe that's what a Stone Magnum actually is, a slingshot, a giant killer.

Highlights include: "From Time To Eternity" and "And Now the Dawn"

Reminds me of: Destroyer of Light, Hour of 13, Iron Man, Magic Circle

Stone Magnum on facebook
Posted by LK Ultra at 19:27