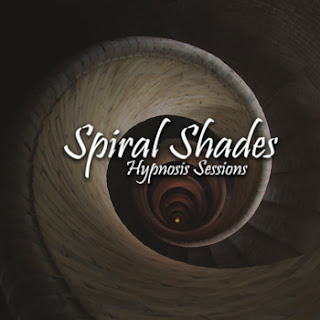 Spiral Shades represents the best of what the internet has to offer to the arts.  Filip Petersen, a musician from Norway who, on the strength of cover song videos uploaded to youtube, has garnered a solid cult following and parlayed that into a globe-spanning recording effort with a like-minded friend from India.  On youtube, he is called Deventy and his videos are well-known and well-loved in the world of doom metal.  Now, it appears, it's time for him and Khushal Bhadra (guitars, vocals) to "give back" to the genre.

Right off the  bat, Spiral Shades hit you with energy and power.  In some ways it's an unusual first strike, rather than building layers of ever increasing slow and heavy waves before launching into a fully formed composition as would be the typical doom thing to do, Spiral Shades just grab you and toss you into the deep end all at once.  But it's on this opening track, "Frustration" that you already begin to see how aptly named the band is as the riffs hammer, bend and curlicue in agonizing contortions ... and it sounds great!  Bhadra is Ozzy-like, sounding nearly like Christian Linderson of Goatess & Lord Vicar, etc., he does it with a good deal of skill and it never sounds strained or forced the way some Ozzyesque vocalists can be, but just a word of warning for listeners, don't expect a lot of variation in range, technique, melody or style.  "Frustration" sends a shock through the listener with its abrupt beginning, but before too long the band settles down into a sound which may soon become one of the more highly original and identifiable within the genre.

This duo also released a trio of preview songs on Soundcloud in the days and weeks leading up to 'Hypnosis Sessions' release.  "Illuminati" was the first of these that I heard.  Chandleresque hammer-ons, drums that build to a crashing climax and frothy electro static fuzz are married to a vocal that is every bit as Ozzy as it is inherently Indian with its steady vibratto melodies.  Spiral Shades have something unique going on here.  There are little bits and pieces that sound vaguely like doom bands that have come before, and only the best and most classic doom bands at that, however, the full compliment of elements can't help but congeal into something fantastically unique.

Spiral Shades distinguishes themselves by their high energy and virtuosic performances.  The guitars speak on this demo.  They speak in a language that is sophisticated and distinctive and they speak it in a loud and authoritative voice.  On this album the guitar is an instrument of interstellar / infernal communication, pulsating, twitching, convulsing, billowing, rending but never breaking.  "Wizardry" is perfectly named as a showcase of the band's guitar wizardry indeed.

Typically, songs are kept on the upper end of the doom speedometer, when Spiral Shades slows things down it's as a counterpoint to the headiness of the rest of the album, dragging you through the sewer as it were, perhaps for some perspective.  And though they're a faster band than most doom combos, their resonant sound rumbles speakers with the deepest, heaviest and slowest of them.

Doommeisters be forewarned, you're going to feel like an idiot if you miss out on this album and everyone's talking about it at the end of the year.  This is easily one of the best and certainly one of the most unique and distinctive doom albums of the year so far, and we're two thirds of the way through the year so that kind of phrase is beginning to take on some meaning.  The internet is a crazy place, where people do crazy things and get a lot of attention for no good reason ... but then on the flipside there are people like Petersen who, as Deventy, does his own thing, makes it interesting, gets a small amount of attention, but from the right kind of people, and parlays it into a demo album that can stand proudly next to the efforts of those who inspired him.  Then there are people like myself who take further notice ... and so on.  What does it all mean?  All I know is that this album could not and would not have been possible without the influence of the internet.  How is it possible to make an album with someone you've never met?  Let alone an excellent one!  I don't know, Spiral Shades do, they can show you how on the player below.

Highlights include: "Illuminati" and "Wizardry"

Spiral Shades on facebook
Posted by LK Ultra at 19:57