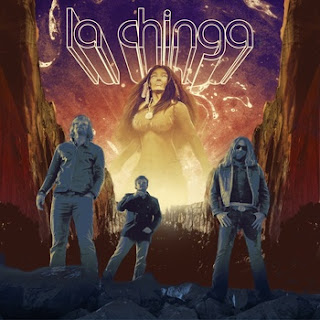 I was in Mission, B.C. recently, a small town of roughly 36,000 (that feels like 5,000) about a 70 minute drive from the city center of Vancouver.  While there I spotted a concert flyer stapled to a telephone pole, about a block from my Mom's house.  I saw the name La Chinga emblazoned on the flyer and nearly plotzed.  La Chinga came to my attention months ago when this album came out but I put off buying it for whatever reason and it languished in my bandcamp wishlist all that time.  Then it started showing up on the Doom Chart as voted for by other bloggers, etc. (I trust we all know the drill about the Doom Chart by now?  If not, don't be afraid to leave a comment below and ask).  I figured there was no way the name on the flyer could be of this La Chinga, Doom Chart La Chinga, it simply had to be another band with the same name.  Well, I rushed inside and did the most rudimentary of checking and lo and behold, the band is from my very own backyard, Vancouver, B.C..  With the release of Funeral Circle, The Anciients and Black Wizard's respective albums it's been an excellent year for music from Vancouver and La Chinga does nothing to tarnish that record.  And speaking of records ...

... 'La Chinga' is an exuberant first foray into the great unknown by a hungry and greasy band.  La Chinga does rock n roll the way it's meant to be done, with long hair, wailing and expressive vocals, and enough venom-soaked denim to poison and clothe the homeless (and there are a shit ton of homeless in Vancouver.

Anyway ...).  La Chinga scratch out a niche for themselves that wouldn't be out of place on the roster of Small Stone records, albeit a filthy niche.  The seventies vibes are as vibrant as an aquarium full of sea monkeys.  On their bandcamp page, their byline reads "HARD ROCK done by rockers" which is about as lucid a statement as can be, because that's just what you get here.  It's obvious that there is true love of the artform on this record.  There's a palpable joy between the grooves of the record and a devoted respect and fearless admiration of guitar-based ROCK around every corner of the record.

La Chinga treats the music the way you would a beautiful woman, there is respect and admiration there, but it only brings out the best and most positive forms of aggression in the band.  Confidence!  Confidence oozes from La Chinga like squeeze-tube sleaze, always ready to get down to business, the business of women-chasing and beer swilling.  These are my kind of people, this is my kind of rock n roll.  But don't get the wrong impression, the boys in La Chinga aren't just about caveman-ish activities all of the time.  Every now and then they are known to lie back on the hood of their Camaro's or in the backs of their flat-bed pickup trucks and stare up at the night's stars as they finish off the last of their brews.  You know, introspective, soulful, thoughtful.  Check out "To Let Silver" if you don't believe me.

The band lays rubber on the Led Zeppelin, Steppenwolf, Rolling Stones and Mountain highway with a healthy dollop of Hendrix inflected wah for that exclamation point, not unlike an accessorized bulging sock to "add dimension" to the crotch.  Does that sound like a put-down?  It's not.

While most of the songs on this 10-track album are of equal quality, the band's finest hour may be their eponymous cut, "La Chinga".  It's just piston-pumping rock n roll that crashes through walls ("ooh yeah!") and sounds like a lost gem that's been moldering in the recording vaults of some gastown recording studio for the past 40 years or so.  It may be the best hard rock song my city has put out since the days of Heart and Loverboy and I do not make that statement lightly.  No sir, I DO NOT MAKE THAT STATEMENT LIGHTLY AT ALL!

'La Chinga' kind of reminds me of how my jacket smells: musty with a top coat of cigarette smoke, regions of unidentifiable stains, a back patch of sweat and a ... sniff, sniff ... slight trace of fecal matter.  And if I absolutely have to sum up this album in one word it would be ... righteous!

La Chinga on facebook
Posted by LK Ultra at 18:38