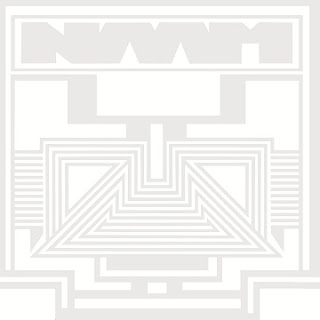 Naam is one of those bands that you hear about all the time as a new guy in the rock & roll underworld.  What I knew about them before sampling this album was that they are from New York, they play psychedelic rock and their most recent album 'Vow' features a nearly invisible album cover.  I also know that they had polished up their heavy black boots for this album to made a sizable dent in last month's Doom Chart jumping from 34th place to 17th and officially landing themselves on the paranoid radar screen.  I took a quick listen, nearly shat myself and grabbed a copy.

As with most treasure finders I stashed the loot at a secret place where it could be just myself, the album and the walls.  I puzzled over the contents of this strangely adorned disc with hand on chin.  I was doing some heavy contemplation.  Then it hit me.  I was doing it all wrong.  I needed to take the hand from the chin and perhaps replace it with a drool cup because what this treasure called for was a turning off of the mind.  It was all so simple, and brilliant.  To turn on the album was to turn off the mind!  Energy neither created nor destroyed, the contents of a vessel emptying into another vessel, for every action a reaction.  It seemed in my humanly physical limitation I had been given enough "on-ness" to either keep the mind fired up, or blast 'Vow' on the ol' Victrola.

So I sat back in my secret place, and I entered a world.  There was deep tone there, and vertigo.  Deep toned Fuzz and vertiginous Organ.  Album intro "Silent Call" gave me the spins and it's a long way down from there to the bottom of the rabbit hole.  Things go on in this tunnel world, strange, unaccountable things.  Interludes braid between songs and do something fascinating: they actually enhance the songs around them.  They work in a similar way to behind-the-scenes commentaries or deleted scenes on a dvd, clarifying meaning and further exploring themes.  You can't account for something like that.

Other things go on in this world, acoustic things, swirly things and even droney things.  Things that suggest still further worlds to explore beyond the pocket dimension of Naam.  Things that suggest a third level of reality from which the raw materials of composition are mined by Naam and carried to higher places to be worked on and polished off.  Naam shows you the whole process and makes it coherent, in a sort of dream-like way.  But make no mistake, 'Vow' isn't an experimentation-first, collection of illogical navel-gazing.  Naam may show you glimpses of the process, but it's the finished results that they are most interested in showing, not the laboratory work.  It's the finished songs that are the star of the show, not improvisation.  The short interludes become an ectoplasmic glue, allowing the album to hang together, creating a fluid environment of ethereal void, through which the listener plummets.

Naam provides a fresh take on the psychedelic genre.  That they build new sounds from traditional origins is the best part.  "Beyond" may be the fullest expression of this: ghostly choirs, synthetic smoke-filled environments with a stringy skeleton of jangly sitar, the raw ingredients could easily result in everything you've ever heard before ... again and again, but what you get is something new and fresh, infused with vitality.  It's easily the most far out full song on 'Vow' but is somehow representative of the whole, incorporating bits and pieces of the rest of the album into its mass, becoming the concluding paragraph of a psychedelic essay.

The songs are focused and the emphasis is on familiarity (verses, choruses, traditional instrumentation), but there's always that hint of otherwordliness about.  Instead of staring deeply into the void Naam keeps it in the peripheral, but it's always there, a hungry threat.  This allows the band to focus on writing complete songs, while they allow the listener to be sucked into the portal that shimmers and swirls around them.  Minds switch off, expressionless faces twitch and dinner is served, full of nutrients with no empty calories.  Now if only I could remember where I parked my mind ...

Highlights include: "Vow" and "On the Hour"