Oxford, England's aptly named Desert Storm aren't out to reinvent the karmic wheel, they just want to take it for a spin, the ultimate roadtrip on 'Horizontal Life'.  In a way, the album title should give you a solid idea of what the band is all about on this one, it's a linear thinking monolith with a 'head down and forge ahead' attitude found in the basic early song structures which build towards increasingly complex ideas with the passage of the album.

For the most part on 'Horizontal Life', especially early in the going, Desert Storm establishes a solid identity that's not entirely separate from the one found on 'Forked Tongues' yet in many ways is miles ahead of it in terms of development.  Listening to the two albums back to back is like listening to a band grow from adolescence into manhood. As for that alluded to identity, Desert Storm spins out Stoner Metal at will and in great abundance like some kind of metallic candy floss.  Mmmm, spikey.

An important thing to note is the band's desire to boot open the doors of perception and take a more thorough look at this stew we call reality.  This emphasis on immaterial matters is explored both lyrically and musically, although that may not be apparent upon a cursory listen of the first couple tracks, it's there and takes greater and greater shape as the album plays on.

But even if you are not one to explore the canyons of your mind, Desert Storm isn't going to force things down your throat.  It's enough to enjoy the raw visceral power on display.  You see, Desert Storm hits you on multiple levels and you can't help but respond in one way or another.

And then "Titan" comes on and throws you for a complete loop.  Its hollow black metal atmospheres of the opening passage make you wonder whether this is the same band playing.  Ah, the wonders of the computer age (did I accidentally play a video or another song or playlist on itunes?  Nothing is safe when clumsy fingers interact with keyboard navigation).  Anyway, the song becomes an epic spaced out journey through parts unknown which for a moment or two becomes a quasi psychological thriller soundtrack from the 1980s.  Somewhere in the mix the band also comes to a boil on some of the heaviest, headbanginest and groovy sections of the whole album.  If that sounds awesome to you, it's not nearly as awesome as the song itself.  The atmospheric wizardry continues into eastern/western headspinner "Gaia" as the full scope of the album begins to come into focus. 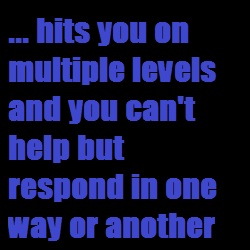 'Horizontal Life' is like a classic album from a time when bands not only wanted to, but were encouraged to try new things, take on different textures and styles all on one record.  The band maintains a singular identity but fearlessly ventures into unexpected places.  Not a lot of bands are brave, willing or capable enough to do such a thing.  They were in the sixties, and there hasn't been a lot of this experimentation since, I find.  Corrosion of Conformity's 'Blind' album and some of Alice in Chains' early different takes on their own sound comes to mind but there just hasn't been too much of it.  Desert Storm 'go there' and deserve your respect and the lending of your ear for their efforts.

With 'Horizontal Life', Desert Storm has crafted a sword.  They take the 'stoned' sounds of the desert and having dug around in other gritty areas of the earth, take those stones and raw elements and smelted them down, refining them into a solid piece of metal.  It swings, slices through but also leaves a heavy impact.  Yes, this album is a sword.

Highlights include: "Shadow of an Eagle" and "Titan"