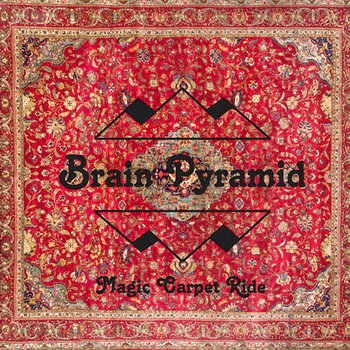 Rambling down the dusty old trail by way of France, Brain Pyramid just want to blow some heads open with their acid blues jams.  Bands like Savoy Brown, Killing Floor, Love Scultpure, Free, Bakerloo, The Groundhogs and Ten Years After finally have a suitable successor in this trio.  Liberal helpings of wah and other guitar effects mix with a lazy vocal delivery to create a crazed atmosphere where ... 'things' ... are all happening man ... and 'stuff' ... but none of it seems to bother the Brain Pyramid.  They simply let the world buzz on by in its self-importance while they weave intoxicating spells in the blues idiom for all who will listen.  Heads take note, this is brain-melting psychedelic blues for the 21st century.  Fans of Ape Skull and Tangerine Stoned, won't want to miss Brain Pyramid.

BIO:
"It’s in the non-psychedelic town of Rennes that the Trio formed, Brain Pyramid was born by the meeting of Baptiste (drum) and Gaston (guitar/vocals) in october 2012, they were quickly joined by maxime (bass), but after shows with him he had to leave for his studies. He was replaced right after by Ronan (already playing in the Doom Stoner band Huata), met during a show.

"The band started with couples of jams, and then constructed itself little by little to become what they are now, a sound full of the guitar-player’s 60’s and 70’s influences : Heavy Psych and Heavy Rock stuff like Blue Cheer, Toad, Jimi Hendrix, Leaf Hound... But also a very tied rythm section that remind us the desert rock sound with bands such as Kyuss, Sleep, without forget classic : Black Sabbath, Led Zeppelin....

"The Trio recorded his first EP at the end of march 2013 : that first try has to aim giving the public a whole idea of the sound and the set of the band.

"Brain Pyramid is now searchin for live experiences, to play a lot and give a strong, acid and cosmic music to your Brain !

"Brain Pyramid did mainly shows in their hometown of Rennes, in bars and little scene.


"We shared the stage with Psych bands like Prisma Circus or Cheap Wine, this summer we’ll be playing the Celebration Days Festival with bands such as Aqua Nebula Oscillator, Blues Pills, Dean Allen Foyd, Mud Walk...

'Magic Carpet Ride' is currently available as a Pay What You Want download on bandcamp (click links on the player below) and an extremely limited edition of 50 CD copies for a measly 3 Euros.  Collectors: that's a solid investment.

One more thing, look at that album cover.  It's a carpet, a 'magic' carpet, but the format doesn't quite work because it's square.  If you ask me, this thing is begging, BEGGING for a cassette tape release as the rectangular shape would bring that cover to a whole new dimension.  Enjoy the music responsibly ...