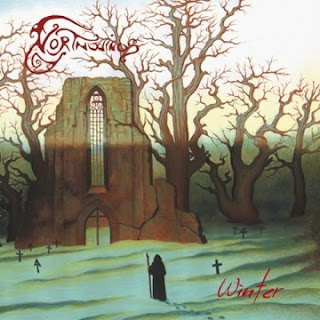 Northwinds most recent album 'Winter' came out over a year ago but it's new to me and most likely it will be new to some of you out there.  However, the band is anything but new.  They've been kicking around for some 25 years or so now in one form or another, existing in large part in a virtual ghetto of doom in their home and native land of France.  But four full-length albums into their career and they remain undeterred in their aims, 'Winter' is all the better for it as I contend that it's this apparent Sisyphusian battle which has helped shape, inspire and spark the overall tone and themes of the album.

Themes of aging, slowing down and deterioration are clear and present without being overstated.  The album title 'Winter' alone gives one an idea of the thematic content found inside.  Cold happens when molecules slow down in their vital vibrations begind to shudder to a halt until atrophy sets in, when this happens, living organisms slow down and ultimately stiffen, collapse and die.  The intro "Turned To Stone" and later Angel Witch cover track "Gorgon" seem to symbolize the ultimate expression of these ideas and the logical conclusion of the state of 'cold' or 'winter'.  How much of this is "thematic statement" and how much is simply the band wanting to do an Angel Witch cover inspired by the 1964 Hammer film of the same name is debatable but the intro gives a clue that the band was clearly thinking about these themes rather carefully.

Other wintry feelings are provided by cold and distant atmospheres laid down by the keyboards.  This may be the most interesting and memorable element of the band.  Horror film soundtrack elements from the late eighties / early nineties lay a dark foundation for a decidedly intimate setting when the music opens up into seventies prog soundscapes for the verse.  This technique is used to amazing effect on "Land of the Dead" and "Black Tower" and it never ceases to heighten the mood of any of the songs on 'Winter'.  The prog elements are neither mathy nor overly layered with disparate elements and skyscraper song structures but contain a sensibility.  Moods materialize out of an ultimately laidback feeling from the guitars and vocals meeting with a powerful and energetic rhythm section.  Of course, 'Winter' is not a one note kind of album. 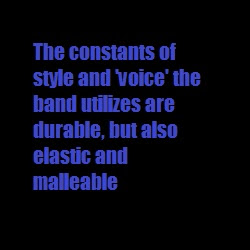 Northwinds are veterans and understand the energy that ought to go into each section of music and provide it accordingly with a deft hand.  As for the songs themselves, you'd be hard pressed to pick out one or two that standout above the others, but again, this isn't because all the songs sound alike.  Each song is incredibly different from the others.  The constants of style and 'voice' the band utilizes are durable, but also elastic and malleable.  No two songs sound alike, but I suspect if you like any one of them you'll like all the others due to the strong identity of the band.  "Last Chance" and the 22 minute epic title track "Winter" have Sabbath-like riffs and vibes while "Gorgon" and "Clear Windowpane" have more rocky elements and are just otherwise unlike anything else you'll hear within the genre of doom.  The latter Saint Vitus cover in particular is incredible.  Northwinds Infuses the song not only with funk elements but also with their own trademark keyboard laden atmospheres, this is the way cover versions are meant to be.  Take a song and make it your own.  As always, especially with "Gorgon", the emphasis is on instituting a cold and otherworldly atmosphere setting up the band for their knock out punch of energy, storytelling and melody.  "Winter" is a masterclass of combining the hell hot riffs of Sabbath with the moon cold soundscapes of Pink Floyd, throughout it all however Northwinds maintains that strong individual identity.

From the brief itunes clips I've heard up to this point of the rest of the band's recorded legacy, 'Winter' sounds like a punctuation of the various elements the band has incorporated into their sound over the years.  Much like the Maryland Doom masters Revelation, Northwinds started off as a fairly traditional metal band and has slowly over the years added layers of doomy progression and instrumental experimentation.  But, near as I can tell, there isn't much either within Northwinds' back catalogue nor within the entire oeuvre of doom that prepares the listener for this.

It's been said, the band have another album in the hopper called 'Eternal Winter' which will act as a companion to this one.  I for one am excited to hear it and to see how it compliments this album musically, if at all.  'Winter' is an excellent album, if you're a new fan, like me, or haven't yet had the privilege to listen to the band, this is a fine statement of atmosphere, tone, mood, riffs and individualistic identity.

Highlights include: "Black Tower" and "Land of the Dead"

Reminds me of: Blizaro, Revelation