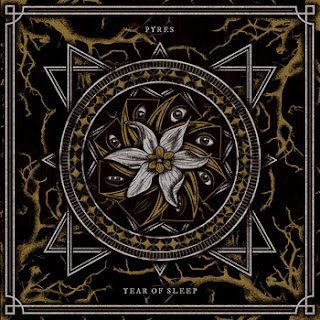 Right from the opening of "Proximity" it's apparent that each moment of 'Year of Sleep' is well thought out and executed with precision.  About a minute in and I'm sold on this band.  Well, I may be a cheap date but it's now up to them to lose me over the course of the next 39 or so minutes.  Will they withstand the pressure?

Pyres are from Toronto, a place as far away from Vancouver both geographically and culturally as New York is from Portland but the music they produce goes beyond all that, they speak in a universal language of metal.  The fact that they're Canadian, well that's just an extra point in the bag for them right there.  It appears this quartet of earhole heartbreakers knows the fine and subtle art of reviewer seduction.   Way to be from a place that you knew would sway my favor Pyres ... maybe they're just like, trying too hard, you know?

Nah, effort gives you a triple word score on this site.  For Pyres, it comes in the form of a mature sound that is neither light and fun nor tongue-in-cheek and it's no picnic either.  It's a sound that is deadly serious, but not too morose and shows a severity of purpose, intent and execution.  It all may sound like a big boring drag, but it isn't.  This is exciting music, all the more so because it's the band's debut album and one always hopes that there are many more such albums to come.

Pyres display a refined ear towards composition that begins with each individual performance on the record.  Each note finds its correct position, every beat sits in it's correct place and each moment would be rendered incomplete with any single one of those elements missing.  That's not to say that this is an uptight and rigid sounding album with wall to wall noise and filler.  There's a lot of empty spaces left over when it all comes together, creating momentum, groove and metal swing.  Indeed, the compositions seem to grow from those empty spaces like a mysterious force of nature.  Every track on the album is complete and sounds as though having sprung from the fertile womb of the most natural of states of being. 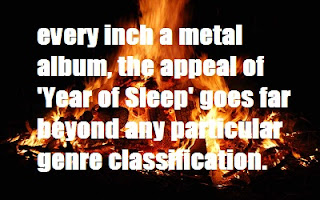 Without a doubt, 'Year of Sleep' is one of the most refined and (hate to use the phrase) 'professional sounding' recordings the underground has produced all year long.  Some might argue it's a bit over-cooked in that regard but I beg to differ.  This isn't a flossy or clean recording by any stretch of the imagination.  The musicianship and songcraft are just a cut above.  In a way it reminds me of a lot of nineties recordings and albums in terms of texture, though I can't name you which ones.  Musically, it's on a plane of its own.  Sludge that's neither too busy nor too slow and every inch a metal album, the appeal of which goes far beyond any particular genre classification.

While staying mostly within the mid to low tempos there are moments that blaze, such as on album closer "Everbearing" which starts with an almost Monster Magnet or early Tool-like frenetic energy before trading in more hardcore circles.  The hardcore tendencies of the band never stay longer than a cup of coffee (or an adult beverage) much like hardcore songs themselves.  It's almost as though these short and sweet moments develop branch-like tumors of song structure.  Starting off with a short blast, then layering it front and back, then separating the wheat from the chaff until what remains is a concise and dense nugget of hearty and nutritious metal.

This may be Canadian Metal Album of the Year when it's all said and done and is a strong contender for my personal favorite Canadian Album of the year, it's that good. (but it's got some heavy competition, that's for sure).  The only thing that stops this album from being a 5 is the absence of a truly, truly stand out track.  They're all excellent songs though.  As of right now, Pyres are one of the best kept secrets in metal, listen on the player below and let's see if that doesn't change.

Highlights include: "Proximity Anxiety" and "Atlas Cast No Shadow"

Reminds me of: Anciients, Eyehategod