Tombstone is a relatively new band in the stoner and doom scene.  Don't feel bad if you've never heard of them.  They had a four song demo out last year and it was damn fine.  Thick, thick, smokey vibes nearly had the listener coughing and choking while listening to it.  This is their second release, but their first full-length and there have been changes or updates to the sound (more on that in a minute).  But if you're not already familiar with their demo, this is as good a place to jump in as any.  Tombstone rides the line between stoner and doom the way a witch rides a cursed wretch, suffocating in its granite block heaviness while retaining an eye catching beauty.  The guitar's tone is sharp but edged with fuzz, a fungal blade, studded and barbed with thick and deadly spores.

Strides have been made in a very short time.  'The Devil's Ride' demo was a good, dare I say strong opening salvo from a new band, but compared to 'Where the Dead Belong', it almost sounds inconsequential.  Right off the bat, the first thing you notice is the sound quality of this new release.  'The Devil's Ride' featured a murky production and a bevy of bum notes.  Of course, I just so happen to be the kind who digs that sort of thing, but there's no substitute for getting one's message across in the best light possible.  This new album does just that.

The band has brightened their sound considerably to go along with the greater sound quality.  That beautiful and heavy tone (can it be called a BBT [Big Beautiful Tone]?) is just one manifestation of this brightening.  The change in overall tone is most apparent on the re-recorded "Born of a Jackal".  A theme song for the band of sorts, it's at least three atmospheres less crushing than the original version, but there's a sleekness to the re-recording that makes it go down smooth.  Pressures still remain high throughout the record though, the ... strain ... unbearable ... on "No Tomorrow", a true slow, heavy and downtuned highlight.  In short, the riffs born under the jackal's moon are still sweetly nauseating in their tritonal rollercoastery. 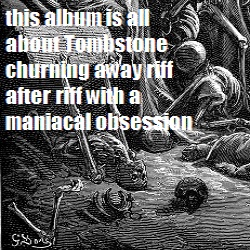 Opening shot "Dance of the Dead" establishes the tone that the rest of the album will follow.  Vertigo inducing Riffs as big as the full moon as seen from the top of a crumbling mountain roll in waves, one after another, always satisfying.  The easiest, most natural thing in the world would be to compare what this band is doing to the stoned vibes of Sleep, specifically from that band's classic 'Holy Mountain' album, but that comparison might be a bit unfair to Tombstone.  Let's not get carried away here.  Still, there's a similar sensibility there to tone, mood and atmosphere.

Like fellow French doom/sludgesters Cult of Occult, Tombstone can infuse darkness into their music without having a particularly dark sound or tone to the instruments.  The darkness comes from the compositions themselves.  "Shrines", "No Sanctuary" and "Werewolf" in particular feature some ebon moods in counterpoint to the more stoner-y tone and feelings found on the record.  You can approach this album from different mindsets and it will sound appropriately different with each one.  In the end however, this album is all about Tombstone churning away riff after riff with a maniacal obsession.

Tombstone save the best of all for last with "Werewolf".  Ten minutes of incredibly dark and looming atmospheres, it's as catchy as it is bass heavy as it is epic in scope.  Somehow, the specific bass tone used here catches the full pregnant belly of the full moon in its all its silver glory, while the guitar and drums captures hectic scenes from the deep woods, the rush of grasping branches in your face and the warm night air running through your fur as you run down your panic-stricken prey.

This album has been streaming on bandcamp since January but was finally made available to download this very week.  Now get out there and get you some!

Highlights include: "Werewolf" and "No Tomorrow"

Better Reviews:
Temple of Perdition
Welcome to the Void