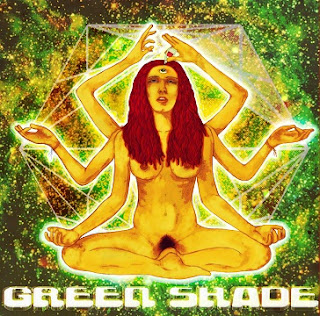 There's something slightly mysterious about an orphaned and 'homeless' EP such as this.  The band has not gone through the typical, if not traditional, channels to disseminate their music (bandcamp, facebook, myspace, soundcloud, reverbnation, et al.).  With just a youtube account under the user name Green Shade (link below) to their apparent credit, information about the band is sparse to non-existent.  What is known is that the band is from Croatia and "This record is a product of loooong summer of 2012. and it's completely lo-fi-DIY project".  With that in mind, not knowing at all what to expect, but diggin' on the psychedelic and slightly cheeky artwork, the play button is pressed.

What greets the ears is spaced out psychedelic stoner rock not unlike a snarling beast-like madhouse reflection of Hawkwind.  The songs are framed around filthy bass grooves and driving riffs with an accent toward the trippier side of rock.

This is stoner rock in its purest form, almost making for a perfect example of what it's all about.  It's not quite hallucinogenic so it's not psychedelic, but the music will have your head buzzing, so it's stoner.  Hard driving, fuzz-muffed, groove oriented, headbanging rock n roll with stare off into space moments.  Classic.  Text book.  Sounds clinical and boring but it isn't.  There are two sides to the stoner rock fan, I think.  On the one hand there's the side that loves the experimental aspects of bands, listening with salivating interest at what direction the music will be pushed in next, what boundaries will be skirted and scoffed at and what unexpected sounds turn up along the way.  On the other hand, there's the purist side that just wants to hear ... well, what it wants to hear, which is good old heavy rock n roll.  Green Shade appeals to the latter side. 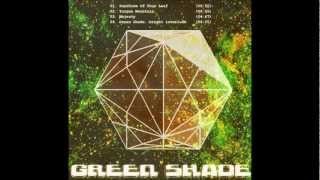 "Sunshine of Your Leaf" kicks things off with a nice loose jam before settling into a funk riff with plenty of stink lines.  The vocals have a satisfying tone served with just the right balance of skill and raunch.  "Yorgan Mountain" continues from there, great riff, a loose feel, vocals that contribute and never detract from the listening experience and a heaviness factor that is ramped up in measured doses.  That heaviness factor is ratcheted up even further in "Majesty", a slightly more structured song.  The riff in this one has a great slow swagger, these Croatian dudes just rifle off one fantastic riff after another.  The title track is a different beast entirely, starting off with a "Planet Caravan" vibe and moving into the main riff and verse so subtly that the band is into the chorus by the time the listener has shaken off the otherworldly fog set in by the intro.

Picking favorites on this one is really tough.  All four songs are excellent, well-crafted and possess their own character within a classic framework.  'Bright Interlude' must be required listening for dirty fuzz rock fans of all stripes.

Highlights include: "Yorgan Mountain" and "Majesty"

Reminds me of: Hawkwind, March The Desert, Spacefog

Suggested listening activity for fellow non-stoners: Confront the god of the mountain on his home turf, wait for him to appear, then unleash the fuzz kraken!

Better Reviews:
Stoner Hive
Ride With the Devil
Welcome To The Void in Greek

Special thanks to Joop Konraad of Stoner Hive for introducing me to Green Shade via his excellent review.
Posted by LK Ultra at 19:29