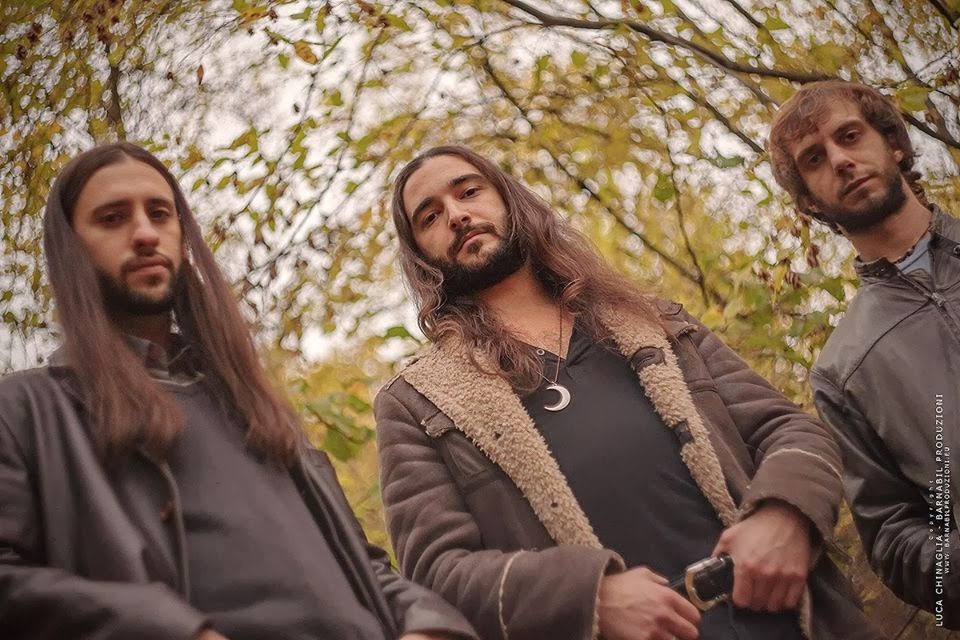 Doctor Cyclops is a bluesy doom power trio from Italy.  Their second album 'Oscuropasso' has swiftly become a favorite here at the Paranoid Bunker.  Steve Howe from the Sludgelord and I teamed up to interview the band recently.  As a stoner/doom blogger I have been influenced by many, Steve Howe included.  I learned from Steph LS of the now defunct and much lamented Temple of Perdition blog many things, one of which was to not double up reviews and interviews of the same band around the same time.  I haven't written a full review of 'Oscuropasso' because we did this interview, but hopefully you'll get to know not just the band, but also get a good idea about the music from the words herein, it's depth and where it comes from.  But for the record I think it's an ACE album!  A huge thanks to Steve, Chris, Francesco and Alessandro for taking the time out to make this happen!!!!

You can also check out the band on their own official website here.

And now, the interview

SL = Hi Guys. Thanks for doing this joint tag-team interview as we have came to call it. Can you tell our readers a brief history of the band and where it is today.

CHRIS: Hello to you. Doctor Cyclops started as a live power trio in 2008, although the project was born earlier, when me and Francesco decided to play music together. We were childhood friends, from the same little village on the Appennino Mountains called Bosmenso. We focused on the trio formula after seeing Bill Steer’s Firebird in 2005 I guess. then we practised a lot, with different people, till 2008. First line up  was built with a different drummer. We started playing live, and we tried to do it more often as possible. We began in a cellar and we finished playing Europe… In 2010 Alessandro Dallera joined the band on drums, and that’s it. In 2012 we released our first lp, Borgofondo, through the german label World in Sound, and now the second one’s. We are currently getting’ ready for a german tour, which will start on February the 28th.


PH = I seem to detect a strong late 60’s early 70’s heavy prog and blues / proto-doom influence to Doctor Cyclops music.  Is that accurate?  What are some of your favorite old records?  (‘Cobweb Hands’ suggests Uriah Heep …)

CHRIS: You’re right, apart from Uriah Heep, which we surely dig but we wouldn’t put between the main influences (at least not the conscious ones!). Ok about the early seventies taste and proto doom influences, but I’d also add “modern” influences with a vintage sound…people such as Firebird, Cathedral, Spiritual Beggars, Witchcraft, Blood Ceremony…we due them a lot, as we actually forged our taste listening to them. Favourite oldies? Jumbling I’d say: Captain Beyond (Captain Beyond), Dust (Hard Attack), Sir Lord Baltimore (Kingdome Come) , Aardvark, Truth and Janey (No rest for the Wicked, Erupts!) and Witchfinder General (Death Penalty) between the bests. Between the “moderns”: The Ethereal Mirror (Cathedral), Deluxe (Firebird), Another Way to Shine (Spiritual Beggars), Firewood (Witchcraft), Hisingen Blues (Graveyard), Blood Ceremony (Blood Ceremony).

FRANCESCO: We have plenty of influences, tons of bands that can illuminate you… Aardvark, Arzachel…I’d love to hear our song Cobweb Hands played by Atomic Rooster anyway!

ALESSANDRO: There is a lot of 60s and 70s, sure, but I feel like I’m playing a new kind of music and not an old one. We are seeking new frontiers. 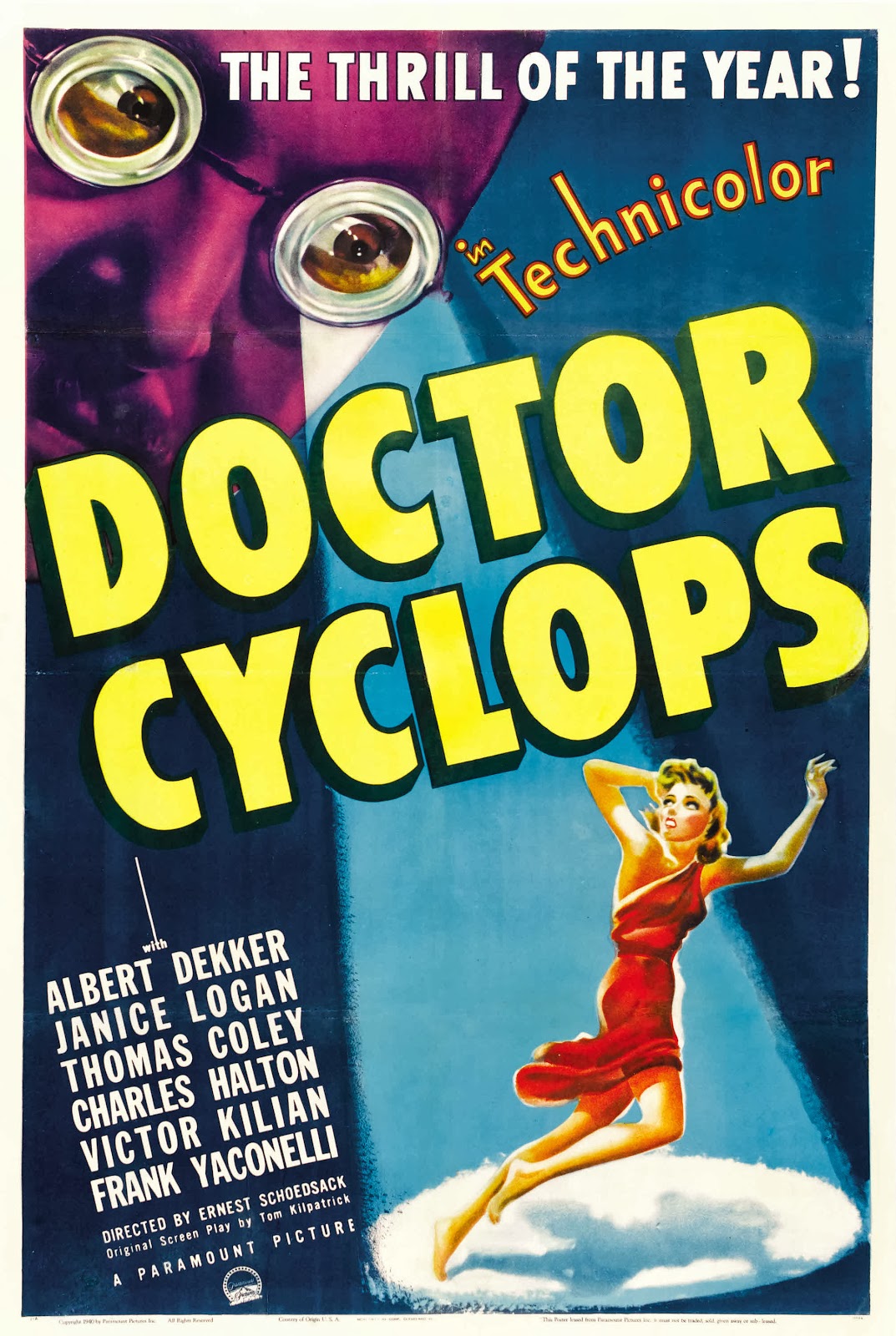 SL = Where did the name Doctor Cyclops come from. Any particular meaning or life changing event influenced you to call your band that name.

CHRIS: We know there is a science fiction movie from 1940 called like that, but it is not strictly connected. The band name came through a phone conversation between me and Francesco. We were discussing about some possible names and we agreed that “Cyclops” was perfect: good rolling sound, and evocative meaning, as the cyclop’ s mythological figure brings to mind loneliness, majesty and freakness. At the time Francesco was taking his degree, so we simply thought that the Cyclop could be a…Doctor. It came like a joke. Then we googled it and we found out about the movie! Which was  a freaky one, to say at least! A perfect coincidence…More like a sign I guess!

PH = So, tell me about the songwriting process for Doctor Cyclops, because I hear sounds flooding in from two conflicting sources, each one reaching towards the surface and threatening to submerge the other in the process.  How does this clash of real solid heavy blues and the more metallic doom stuff all come together? 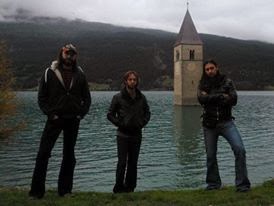 CHRIS: Oh, it’s simple: different tastes. Most of the stuff comes from riffs or piece of songs composed by me or Francesco. Usually when we have an idea we bring it to the rehearsal room, and then we develope it together. It’s rare that just one of us come out with an entire song by himself. We put the riffs together, Alessandro drums on them heavily and we keep on working on it till we are satisfied. Usually the lirycs come after the instrumental part. About the differences and conflicts you hear in the sources… Well, I’m the one with a melodic and bluesy/seventies taste. Francesco is more into the heavier parts. Doom, prog, metal style. Alessandro plays the drum in a seventies way but with a little of 80ies taste… Put it together and that’s it!

FRANCESCO:  well, it’s rare that a song born in the rehearsal room. One of us usually brings an idea in…a riif, or a song structure…then we develop it together, as without the alchemy of our parts it would end with being musically speaking one way orientated, and boring.

ALESSANDRO: We have different tastes, but we found our balance…we’re like a pyramid, you know.. 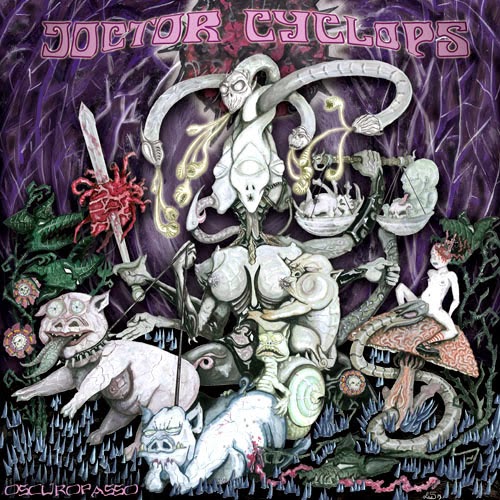 SL = Now congrats on your new album. We love it here at Sludgelord and Paranoid Hitsophrenic. Was it a hard album to write and record for. Did you have much fun making it as we did listening to it.

CHRIS: Oscuropasso has been a strange album in a way. Not hard to write, as the songs were ready since a long time, but hard to produce I’d say. We spent a lot of time (we’re talking about months) mixing, trying different cuts on the master, looking for something we probably didn’t know ourselves! We started with the idea of making an obscure doom/rock album, but it was like the songs themselves didn’t want to sound really like that…At a certain point we decided to let it go in the direction it seemed to have choosen by itself. And to me now it sounds like a kind of proto heavy metal record with many different influences… I liked this in the studio process: that we chose a direction and we’ve been pleasantly wrongfooted. But there have been moments which were not funny at all, such as the mastering process.

FRANCESCO: Personally I recorded my bass lines overdubbing them to the rest, so it was pretty comfortable to me…just like playing along on a record!

ALESSANDRO: Oscuropasso is like the sequel of Borgofondo… I was concentrated to give the best performance on every song…

PH = I wanted to talk briefly about the album title ‘Oscuropasso’ which seems to have several meanings when you think about it, but how would the band describe the album title and how it ties into the music? 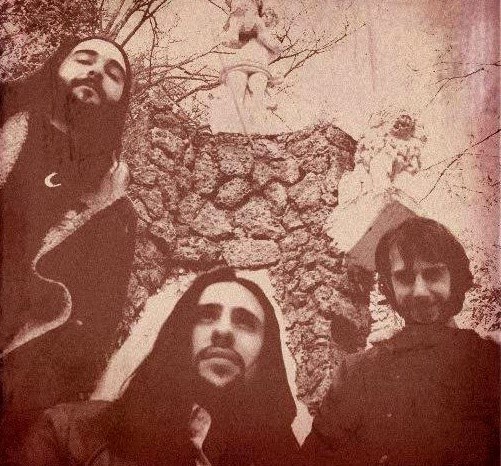 CHRIS: “Oscuropasso”, like “Borgofondo”, is an Italian word which doesn’t have a real translation. It is literally some like “Obscure-pass”: you know, like a mountain pass. It’s a place you have to go through to get into something else. In our case it is a metaphorical way to introduce people into another world. It is the natural succession for Borgofondo, and also an homage to our own language. As for the music…I guess it is enough “obscure”!

FRANCESCO: I like to see this title strictly connected with Borgofondo in a wordplay evoking Borgo Prund, the one in the Dracula movie by Herzog. Oscuropasso continues the Borgofondo’s tale…it doesn’t matter if you are in the village, or still along the trail.

ALESSANDRO: Oscuropasso to me is like a Great Grey Garden where the souls must reckon with their secret fears seeking for freedom.

SL = Obviously you will be playing these tracks live on future gigs in 2014. What will your gig setup be to perform some of these tracks live. Especially Rotten Trolls. As that is one epic kaleidoscope of noise and moods. 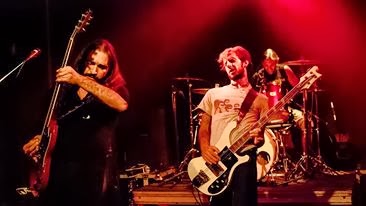 CHRIS: Our setup is really simple: we are three people, so just guitar, bass, drums and vocals. We recorded the songs keeping this in mind, so generally we didn’t put that many overdubs or stuff we couldn’t really play live. Nothing that would really make the difference, I mean. On some of the tracks we put the Hammond organ, but treating it like an ornament and not as an essential part of the song. Maybe the live sound will be in some parts a little bit raw comparing to the record’s one, but we like the idea that people can get different feelings from studio and live stuff. A good example? Truth and Janey: the studio album is “clean” and well finished. When you listen to their live “Erupts!” You find out a completely different thing: rough, heavy, rotten…awesome!!!

FRANCESCO: I’m glad that we have a good bunch of songs to chose between, so that you can give variety to the setlist. Playing the same set every night would be pretty boring, although I know that a lot of bands do it. Playing Rotten Trolls in particular is really exciting to me, as the “war toms” at the beginning recall the audience and you know that you are gonna tell them a story…it’s like a suite, a little music-opera.

ALESSANDRO: It doesn’t really matter which song you are playing…the key is to communicate any single image you want to be connected whit the song…in Rotten Trolls we are on the same ship sailing towards a new adventure!

PH = I think one of the most appealing things of ‘Oscuropasso’ is the combination of different sounds all coming together to create something distinctive.  I would never have expected the church organ at the end of the mostly bluesy ‘Angel Saviour’.  Somehow it struck me as a very cinematic idea.  Do you pull inspiration from a lot of unexpected sources such as horror films and 60’s psychedelic soundtracks?

CHRIS: We do like disturbing movies in general…whether they are horror or cinema d’essai.. Herzog (in Nosferatu and Kaspar Hauser mostly) for example has a great photography and lights, and his landscapes are unique. Really inspiring. Also Night Flyer is a good one, or Dario Argento with the Goblin soundratck…

Interview continued in Part 2 on The Sludgelord blog!
Posted by LK Ultra at 19:39