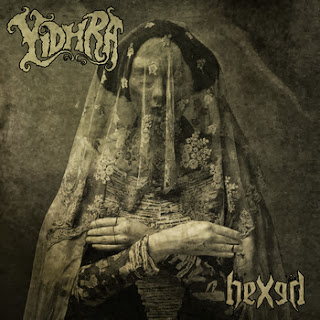 Knowing nothing about the band, having never heard or even read anything about them, I dove in head first expecting to be taken to some dark places.  It was the album cover.  How could this not be an amazing album?  I know, you shouldn't judge a book by its cover, but for albums?  Some advice:  When it comes to metal, cover judgment rarely steers you down the wrong path.  When an album cover makes you feel like you've just entered a dusty tomb, you're at least on the right track.  Yidhra's cover lady with her death shroud and pharaonic pose sets a morbid tone, I'm in.  But this isn't a website dedicated to reviewing album cover art, we're all about the music here, so let's get into it (note to self:  start a spin-off cover art review blog called 'La Galeria de Paranoias').

Press play and get a face full of tomb dust.  Flakes of ancient skin float around the room, settling an inch thick on every track.  Yidhra has found their voice and it croaks thickly, from the ultra heavy guitars to the devil's third riffing, the menacing drums and deep and gravelly, but otherwise clean, vocals.  Yidhra's take on doom is familiar from the cover art on down, but don't be deterred, there's much to be said for getting things right.

'Hexed' has all the makings of a doom classic.  There's a timeless quality to it.  If you didn't know this was a new album, you wouldn't be able to pinpoint what exact year it was from.  It's the kind of album that, when I was brand new and fresh faced to the world of doom (not all that long ago), this would have been one of the albums I'd have considered to be a classic because Yidhra just get it dead right.  Dark, deep and phlegmatic guitars swing low, swing slow and then arc upwards into a spider's web of melody just often enough to provide counterpoint, variation, depth, and dynamics.  Death, depth, darkness, doom, dynamics and decay, this one's got it all!  But above all else, the deep tones and devil's riffs make 'Hexed' an instant classic here at the paranoid laboratories.

At 66 minutes, the length of the record may seem excessive to some, but it's just what the mortician ordered.  This 'more is more' sensibility reminds me of the days when albums were formatted for the 72 minute CD rather than for the 40 minute LP.  Albums were more satisfying then and they didn't come out one after another.  In other words, 'Hexed' gives you a full and satisfying meal, one that will hold you over, not an austerity induced tease.  With songs ranging from five to ten minutes, it's easy to get lost in the tombs of Yidhra, opening chamber after chamber, staring with fascination at the horrors within.  Now doesn't that sound like a good time?  Sure it does.

'Hexed' is a crushing doom album.  This is full frontal worship of the witch queen whose name they bear.  I splurged and picked myself up a CD copy of the album off bandcamp.  The price is set at $10 which is the same as the digital album.  The price point will be a stumbling block for some, but for doom crazy maniacs, if you only budget $10 a month on music, dump it all into this album.  You will not regret it.

Highlights include: "Oath Breaker" and "The Lament of Longinus"

Reminds me of: Cult of Occult, Ramesses, Serpent Venom, Woodrue