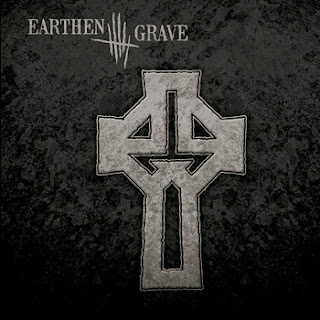 'Earthen Grave' is so much more than just the debut album by a stoner / doom supergroup.  Composed of pieces from Chicago-based doom bands Trifog, Lair of the Minotaur, The Living Fields and bolstered by the likes of Rachel Barton Pine on violin and Trouble veteran Ron Holzner on bass, Earthen Grave is backed by some serious fire power.  The contribution of Rachel Barton Pine lend the album a theatrical flair and give it a progressive touch, bringing to mind late sixties / early seventies "violin as a rock instrument" pioneers as East of Eden, High Tide and the early era Electric Light Orchestra (whose first album nearly did away with guitars altogether).  Earthen Grave have delivered a different kind of album, one that is doomy, countrified and well polished.  At 76 minutes long it's got heft and scope and feels in many ways like a classic.  It won't appeal to just anyone, but for those looking for something a bit different, a bit more progressive with a touch of professionalism from a band that understands that catchiness isn't limited to pop music, this album is probably for you.

The album kicks off in typically doomy fashion with church bells and feedback giving way to a Sabbath-like devil's third riff.  This is a decoy.  Before long at all, the riff breaks down and rebuilds into a jangly countrified lick which begins introducing the elements of the music to come: the clean and soulful vocals of Mark Weiner (Trifog), the dual guitars of Tony Spillman and Jason Muxlow (The Living Fields), the sympathetic drums of Chris Wozniak (Lair of the Minotaur) and the heavy bass of Ron Holzner.  That devil's third riff then comes back for the pre-chorus which is given over to the violin of Rachel Barton Pine like a newborn at a deadly altar and the results are spectacular.  It's as though the band is letting everybody know where they are coming from (using doom riffs as a point of origin), and where they are going (their own way).

Weiner in particular deserves to be singled out for his memorable melodies.  You just read the titles off the tracklist and the gigantic choruses jump immediately to mind: "Earthen Grave", "Tilted World", "Blood Drunk", "Dismal Times" and "Beneath a Shovel Load" among others.  But of the 12 tracks total that make up the album, the original numbers are fortified by three cover songs that are all bona fide classics: Witchfinder General's "Burning a Sinner", Pentagram's "Relentless" and "Stargazer", the ostensible title track from Rainbow's 'Rising' album.  This latter track is also, apparently a live recording, but it sounds pretty much flawless to these ears so it could have been bolstered by some in-studio touch ups.  I'm not a cover songs kind of guy, but when each of these three pop up on the album, I admit I get very excited, I may be seen headbanging down the street, trying to sing under my breath but just looking and sounding like an erratically muttering maniac.  The first couple cover songs are two of my favorite doom songs of all time.  Scratch that, they are a couple of everybody's favorite doom songs of all time, and it pumps you up to hear them in and around the Earthen Grave originals, some of which stand up quite well with those all-time greats.

Another thing this album has going for it is dynamism.  "Beneath a Shovel Load" is a white knuckled heavy metal pounding, while "Blood Drunk" is a dark and haunting brooder on a hay bail in a dusty old barn.  That they can glide between these styles seamlessly is a testament to the band's identity and strength of vision, their musical fingerprint if you will, and of the elasticity of that vision.

I'm constantly amazed at how many different kinds of bands there are out there who fall under the umbrella of doom, how many unique bands there are with their own twists on a sound (see Blood Ceremony, Northwinds and Blizaro among many others for examples of how individualistic doom bands can be).  Earthen Grave is one of the most iconoclastic  of them all.  Even without the violin, this album would stand out as a visionary work in many ways, leading a group of veterans in a well-worn genre into unfamiliar territory, but the truth is the classical instrument is an intrinsic part of the band's sound.  The instrument is not used to augment the songs on the album but is a part of the album's structural integrity.  The style of music the band practices seems to be built around the violin, the tone and country flavor basically inviting the instrument in.  But that's just one element of the band and if it's not about the songs, if the songs aren't good, then the use of an uncommon instrument in a common sounding band just becomes a gimmick.  Fortunately, Earthen Grave dies not make common or average music.  The songs are there, the tunes are there and the album is terrific.

Highlights include: "Earthen Grave" and "Death is Another Word"

Reminds me of: East of Eden, early E.L.O., High Tide