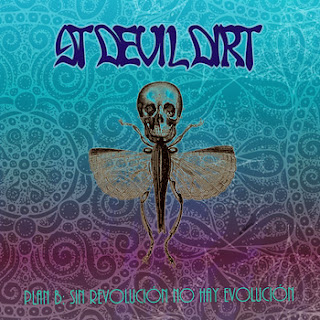 Augusto Pinochet, commander-in-chief of the Chilean army stages a successful coup d'etat against President Allende, the man who had appointed him to the position.  He would hold the reigns of power in the country for the next 17 years.

Memories resonate and echo across time.  A shadow passes over the earth, traveling at twice the speed of sound.  I'm picking up a transmission from the universe as the shadow approaches.  60's underground psychedelia, Smashing Pumpkins 'Siamese Dream' album and a kind of positive social Darwinism will collide with Chainsaw fuzz to formulate a Plan B from outer space.  It's going to cause a stir.  It's going to change opinions.  It's going to solidify things then take them in new directions.  This is what it will look like to see individuals embody the very expansion of the universe ...

The first thought that occurs to me is 'Siamese Dream', but mostly just the heavy, catchy parts of that album.  For the last At Devil Dirt album, 'Chapter II', the first thought that occurred to me was 'Songs for the Deaf'.  Is this evolution?  Is it revolution?  Well for those of us who have been following the course the band has taken in the interim, the transition should come as little surprise.  Besides, it's not as pronounced as I'm making it out to be.  At Devil Dirt is still At Devil Dirt and the dust and dirt that settles on Chilean streets still churn and dance with their immutable power, but let's say there's an extra teaspoon of sugar in this recipe and, importantly, an extra serving's worth of variation.

At Devil Dirt have the increasingly rare ability to craft memorable choruses.  I'm not just talking about pleasant or catchy hooks here, I'm talking about statements with the power of a politically charged lullaby.  Aldous Huxley discussed the ability of melody to worm its way into the mind and change opinion in his 1959 non-fiction book Brave New World Revisited from the chapter "The Art of Selling":

"...melodies tend to ingrain themselves in the listener's mind.  A tune will haunt the memory during the whole of a lifetime.  Here, for example, is a quite uninteresting statement or value judgment.  As it stands nobody will pay attention to it.  But now set the words to a catchy and easily remembered tune.  Immediately the become words of power.  Moreover, the words will tend automatically to repeat themselves every time the melody is heard or spontaneously remembered.  Orpheus has entered into an alliance with Pavlov - the power of sound with the conditioned reflex.  For the commercial propagandist, as for his colleagues in the fields of politics and religion, music possesses yet another advantage.  Nonsense which it would be shameful for a reasonable being to write, speak or hear spoken, can be sung or listened to by that same rational being with pleasure and even with a kind of intellectual conviction."


Such power is dangerous in the wrong hands.  At Devil Dirt have scored the kind of sing-songy messages that are not easily forgotten at least twice on this album:  the title track, and the album's closer "There Is Not A God Or A Devil" (also featured on the Chilean Fuzz II compilation [see the review here]).  The band understands that simplicity is the usher of memory and that this simplicity invites a listener / audience sing along.  John Lennon had the ability to pen anthems with "Give Peace a Chance" and "Imagine" being the finest examples of his politically charged message songs.  It's also clear that At Devil Dirt had Lennon in mind while creating 'Plan B'.  Lennon's "Across the Universe" is covered here (interestingly sequenced right before "There Is Not a God Or A Devil") and the song is smothered in about three inches of dark fuzz.  The Chilean duo had shown the ability to pen simplistic anthemic tunes on 'Chapter II' and that ability has been focused like a laser to match their intent on 'Plan B'.

Of course, it isn't just the above mentioned songs that show this mind-worming catchiness.  I begin to wonder whether or not the band can really help but write incredibly catchy songs.  Opening pair "Don't See You Around" and "Conscience" are marvels of eloquent catchiness.  This is the form the band's evolution has taken, it's all about focus.

As for the revolutionary, AT Devil Dirt tries some things that are altogether new to their sound.  "40 Years Ago" becomes a 13 and a half minute "sound-painting", not entirely unlike "Revolution 9", with clips and samples of what I must only assume is Chile's own notorious dictator, Pinochet propagandizing.  The song is bookended by more traditional sounds, including one of vocalist Nestor Ayala's most ambitious choruses yet, as he experiments with Alice in Chains style dissonance.  Fortunately, the adventurous melody is met by perhaps his most ambitious and far reaching lyrics yet, telling the story of Pinochet and the plight of the Chilean people during his 17 year reign.  I'm not even going to pretend to know what living under a dictator is like, but it is heartening to know that there are those out there who chose not to forget and are still driven to tell the story.  Another branch of At Devil Dirt's revolution is the abundance of slower songs, specifically on side B, something that was missing entirely from 'Chapter II'.  That album could be accused of being a bit samey, however kick-ass.  But perhaps the most surprising strike here in the band's musical coup d'etat is the bluesy acoustic "Time To Flee".  There is absolutely no doubt at all that the band has pulled out all the stops on their latest record and that the band has invested their hearts, minds and souls into its execution.

Years from now, after the revolution ...

When the shadow had passed over the earth, finally completing its orbit, it punched into escape velocity, it's work finished.  Down below a confused murmur arose.  Could it have been a dream?  Had it all really happened?  Yes, the Earth remained the Earth, and there was no way you could feel the difference between day to day and yet it was there.  Something had changed.  Something essential had shifted.  The heavens did not rejoice, the sky did not sing and to a man, the human race went quietly about its business.  Yet somewhere within the heart of every one a confidence pulsated and they knew instinctively, they were ready for the next step ...

'Plan B' will be made available in most musical formats between Halloween and March 2014.  The digital version of the album will be available on bandcamp from October 30 while CD and cassette copies will be distributed from December 15.  The vinyl edition will be out in March from Bilocation Records.

Highlights include: "Sin Revolución no hay Evolución" and "There Is Not a God or a Devil"

At Devil Dirt on facebook
Posted by LK Ultra at 11:58