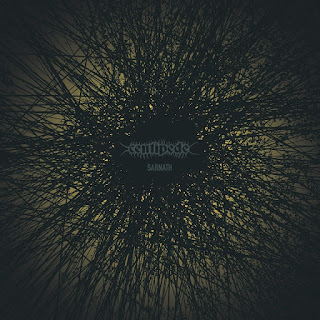 Centipede, a three piece stoner metal band from Helsinki. I hadn't heard of them before this promo was sent to me but according to their bandcamp page they've been EPing for a few years now. Sarnath is their debut album. I didn't know any of this stuff before I pressed play. I like to listen to my albums the way I like to see my movies: knowing as little as possible going in.

DROWN - This is the first single from the album so I've not only heard it, I've been listening to it quite a bit lately. Just a good heavy mid-tempo romper with some nice propulsion. Vocals are more coal than diamond which suits the tone here. Good song.

THE UNSPOKEN - Tempo gets turned up here. Driving tune. Yeah, this one's likely to generate a speeding ticket or two. My ex got two speeding tickets which resulted in her licence getting suspended. The first time was when I put on a Motorhead CD. The second time was when she was alone and the Motorhead CD came on the disc changer. This doesn't sound like Motorhead but it builds up that chugging momentum in a powerful way. Very good tune.

FROSTBITE - More of the same. Nice chugging riff then a slow down for the chorus. Next song will be critical to see if the whole album is samey or not. I'm reserving judgement til then.

ABYSSAL - Downshifting here for a spell. Almost a "Welcome Home (Sanitarium)" feel at the front of this one. One of two short, 2+ minute ditties. Sounds like an interlude. Nice change of pace actually. I don't normally dig interludes but this one actually adds to the album overall. Good creeping around an abandoned house vibe to it.

BLACK MEAD - Getting that samey vibe. I mean, they're all good songs, but Centipede doesn't give you any different looks. Which is rare for a Finnish band, they're usually all over the map. This band kind of reminds me of something I reviewed once for Stoner HiVe but I can't remember what it is ... it'll come to me ...

BEACON OF THE PROFANE - Grande, is the band I was thinking of and it was a review for Sludgelord. It's good stuff, but a bit too samey to truly enjoy the album as a whole, cohesive work. As much as I like these songs, you end up feeling like you've just listened to the same song 8 times over so it's unsatisfying. This one was a short, fast number.

MIDWINTER WOLVES - And here we come back down to earth a little with a slow intro ... and then the big straight ahead heavy rock moves. See, this is ironic. I know they don't mean to, but this band is shoving my musical tastes back down my throat. Oh, the verse is a slow down and the chorus whips things back up into midtempo territory. Anyway, I make it quite clear to everybody that knows me that I don't like the slow songs, but I'm finding myself pining away for more songs like this one. More tempo changes or something, anything! I think another part of the problem might be how consistent every instrument sounds in terms of tone. I don't know. I like the songs on the album, but listening to it in one sitting may be redundant. This makes for some excellent mix-tape / playlist fodder. I think you have to take this band piecemeal, but you'll be more than happy to do so.

SARNATH - And now we come to the title track. The big finish. Let's see what you got ... Nice beginning, floor tom and bass gives the intro a cavernous feel here. Yeah. Okay, fuck yeah, this is what I was talking about. The verse kicks in and for the first time in roughly 30 minutes I feel like I'm listening to a whole new song. This is good stuff, arguably the most doomy song on the album, it feels bigger and more fleshed out than the other tunes. The other tunes are a good time but this is the song you settle down with.

So there you have it, a good album, I rank them all as 5-star songs, yet paradoxically it's a 3 star album. Again, until the last track and the brief mid-album interlude, you feel like you've got one song on repeat when the album is taken in all at once. But break it up, spread it out and listen to it one song at a time on playlists or whatever and I guarantee you'll get a longer shelf life out of this thing.

Sarnath will be available March 4, 2016, a little over a week from now.